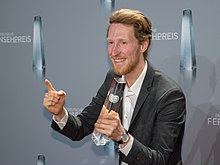 Louis Klamroth (born October 28, 1989 ) is a German actor and television presenter from Hamburg .

Klamroth is one of three children from the relationship between camera assistant Katrin Klamroth and actor Peter Lohmeyer . His younger sister Lola Klamroth is also an actress. His great aunt was Wibke Bruhns .

Klamroth has already played three times alongside his father Peter Lohmeyer. In 2001 he was seen in his first film, the children's film The Mistkerl , alongside Anna Loos , Ines Nieri and Ingo Naujoks . He became known in 2003 through Sönke Wortmann's film The Miracle of Bern in the role of Matthias, son of the miner Richard. Klamroth also played the role of the son in Schenk mir dein Herz (2010), about a pop singer who suffers from memory loss after a heart attack and tries to get in touch with his former wife and son.

Louis Klamroth was a youth player at the traditional club Altona 93 . After graduating from high school, he got involved in the organization SOS Children's Villages in Guatemala and Haiti . During this time he wrote a blog for the news website Stern.de, among other things . Until 2015 he studied political science at Amsterdam University College and the London School of Economics (LSE) .

Klamroth has hosted the political talk show Klamroths Konter on n-tv since 2016 , for which he won the German TV Prize in 2018 .

For the 2017 federal election, Klamroth founded the non-profit association Diskutier Mit Mir , which aims to bring people with different opinions into conversation in an app.