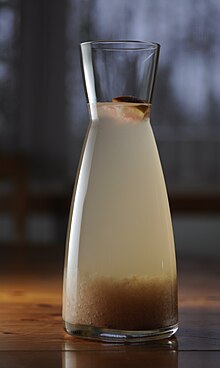 Kefir culture for water kefir. The kefir crystals have an average size of about 5 mm.

Water kefir is a carbonated fermentation drink that is made with the help of a kefir culture similar to kefir grains . This consists of yeasts ( Saccharomyces , Candida ) and lactic acid bacteria . The resulting drink has a certain similarity to Kombucha in terms of taste (sweet and sour) and appearance (yellowish, cloudy) . Water kefir is not commercially available, but you can make it yourself.

The drink produced using this kefir culture is said to have various healing effects, but these have not been scientifically proven. A household approach also requires sugar and, as a nitrogen source, dried fruits such as figs or raisins . Acidifying it with a lemon prevents mold from growing . After fermentation , there is still residual sugar. The alcohol content is 0.2–2% depending on the duration of preparation.

The kefir culture increases by approx. 25–75% per batch, but only if hard water is used. The calcium it contains is needed for reproduction. If you use very soft water, the amount of kefir culture increases a little in the first approaches, but then stagnates. By adding calcium in soluble form, for example as calcium gluconate or citrate , this deficiency can be compensated and the kefir culture can be increased significantly. During processing, care should be taken that the kefir does not come into contact with metal.

One of Bitter Lemon reminiscent bitterness of Kefirgetränkes can be achieved by addition of lemon zest. The bitter substances contained in the white part of the peel are then released during fermentation.

The individual kefir crystals rarely reach sizes over one centimeter. When carbon dioxide is created inside, they are “blown up” and the fragments continue to grow.

Water kefir ferment is a white powder sold in health food stores. In contrast to the "real" kefir culture, these are far more short-lived microorganisms that have already been used up after the 10th batch. There are no differences in the preparation of the drink.

At least two scientific publications describe a natural occurrence of the tibia. On the surface of opuntia in Mexico they form hard grains that multiply in an aqueous sugar solution and thereby form "crystals" that are identical to the well-known water kefir crystals.

Water kefir matures very well in a closed vessel, for example in a clean 1 liter milk bottle, which does not allow the carbon dioxide to escape. However, it is important to ensure that the pressure in the vessel does not become too great, otherwise it could burst.