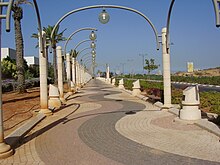 Rishon LeZion was founded by Russian immigrants as a moshava in 1882 , making it one of the first modern Jewish agricultural settlements in what is now Israel. It was named after the Bible: (God speaks): "I was the first to say to Zion ..." (Isaiah 41:27) Then there is talk of a good news that the early immigrants referred to themselves.

The first few years were difficult before a well could be dug. That is why the biblical words can be read in the flag: "We have found water." (Genesis 26:32)

An important sector of agriculture was viticulture very early : In 1887 a winery was founded with the support of Baron Edmond de Rothschild ; from this emerged Israel's largest wine producer, Carmel , which still has its formal headquarters in Rishon LeZion. During the time of the British Mandate , Palestine Breweries was the first in Palestine to produce Nesher beer .

In 1948 the city had only 10,000 inhabitants. After the establishment of the State of Israel, Rishon LeZion developed very quickly. Immigrants from the former Soviet Union and today's Russia , Romanian, German, Yemeni, Moroccan and Iranian residents as well as their descendants shape the city.

The most important branches of the economy are in industry (pharmaceuticals, electrical engineering).

Rishon LeZion has been the seat of the Israel Symphony Orchestra Rishon LeZion since it was founded in 1988 . It has a municipal library headquartered in Kotar Rishon and eleven branches.

A wine festival is celebrated on Sukkot for a week each year .

In honor of the Jewish Nobel Prize winners , a promenade ( Tayelet Hatnei Pras Nobel ) with memorials to the 850 laureates was built in Rishon LeZion (as of 2007).

On October 30, 2017, Paul-Grüninger-Strasse was inaugurated in the presence of the Swiss Federal Councilor Johann Schneider-Ammann in honor of the former St. Gallen police captain and refugee helper Paul Grüninger .

The most famous sports club in the city is Maccabi Rishon LeZion , plus the four-time Israeli ice hockey champion Rishon Devils .