The name of the city "Settlement of Eight" was chosen to remember Joseph Trumpeldor and seven of his comrades who were killed by Arabs on February 29, 1920 in nearby Tel Chai .

The city was founded in 1949 as a Jewish refugee camp and from 1953 a development city on the ruins of the Palestinian village of al-Chalsa , which had been destroyed a year earlier in the Israeli War of Independence . The residents had fled after the capture of Safed .

The first residents were Yemeni immigrants , the first came on July 18, 1949. They named the city in memory of Trumpeldor Kiriat Josef , the city of Joseph. But the first name Josef was soon replaced by the number eight Schmonah . In 1955, the first local elections were held in Kirjat Shmona. The shelling from Syria, which came to an end in 1967 after the conquest of the Golan Heights in the Six Day War, was a constant threat .

Kirjat Shmona is best known for its location on the Lebanese border, which has often made it the target of attacks. One particularly bloody attack occurred on April 11, 1974, when three members of the Palestinian PFLP carried out a bloodbath in a tenement house in the city, killing 18 people, including eight children, before they were killed in a gunfight themselves.

The city also experienced heavy fighting in 1981 when it was shot at with artillery in clashes between the Israeli army and the PLO . Even during the occupation of southern Lebanon (from 1982 to the final Israeli withdrawal in 2000) Kirjat Shmona did not come to rest. Under the Israeli occupation, Hezbollah was founded in Lebanon with the aim of driving the Israelis out of the country. She repeatedly attacked the city with Katyusha missiles .

During the Lebanon conflict in 2006 , Kirjat Shmona was increasingly hit by such Hezbollah rockets. So far, the second Katyusha rocket fire on northern Israel from Lebanon since the Gaza offensive began on January 14, 2009, three rockets struck near the city. 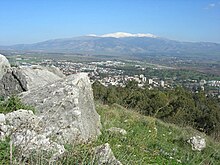 Kirjat Schmona with Mount Hermon in the background, winter 2006