The Mundell-Fleming model is a working model of economics . It was developed independently by Robert Mundell and Marcus Fleming and, in contrast to the IS-LM model, describes open , non- closed economies . 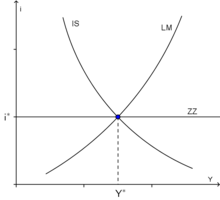 Equilibrium point in the Mundell-Fleming model

The model describes a small economy that is connected to other countries through trade and cross-border capital flows, and shows which policy options exist and how the country reacts to changes in internal and external framework conditions.

For this reason there is a third curve in addition to the IS curve , which shows the location of all equilibria in the goods market , and the LM curve , which shows all equilibria in the money market : the ZZ curve , sometimes also called FE Called curve. This curve represents all balance of payments balances of zero; H. all interest - income combinations in which external contributions and net capital exports add up to zero.

The ZZ curve is described by the following equation (assuming complete free movement of capital):

where represents the interest rate, the (nominal) exchange rate at the time and the exchange rate expected for the following period.

With the help of the Mundell-Fleming model, the behavior of interest rates and output due to expansionary (or contractive) fiscal or monetary policy can be seen, both in the case of flexible and fixed exchange rates. In the following, complete capital mobility is always assumed.

Expansive fiscal policy under a fixed exchange rate regime. First the IS curve shifts to the right, then the LM curve downwards. In the end, the interest rate is the same as it was before the measure, but the output is higher.

A further development is the two-country Mundell-Fleming model, in which large countries and their effects on the “rest of the world” are also modeled.

The AD curve is derived from the Mundell-Fleming model .