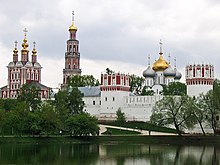 General view of the monastery 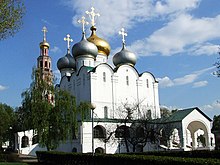 The Novodevichy Convent or Novodevichy Convent ( Russian Новодевичий Богородице-Смоленский женский монастырь (Novodevichy Bogorodize-Smolenski schenski monastyr) literally Novodevichy Lady-of-Smolensk-convent) in Moscow is next to the Trinity Monastery of St. Sergius , the most famous Russian monastery . It got its name to distinguish it from the old women's monastery, the Ascension Monastery in the Kremlin .

It is in a bend in the Moskva River , about 4 km southwest of the city center. In 2004 the women's monastery, which was founded in the 16th century and expanded into the 17th century, was added to the list of UNESCO World Heritage Sites .

On the evening of March 15, 2015, the monastery bell tower caught fire during restoration work.

The New Maiden Convent was founded in 1524 by the Moscow Grand Duke Vasily III. founded in memory of the reconquest of the old Russian city of Smolensk in 1514 and its incorporation into the Moscow Empire. Thanks to generous donations, it developed into the richest and strongest fortified monastery in the southern Moscow fortification ring, which also included the Donskoy Monastery , the Simonov Monastery , the Novospassky Monastery and the Andronnikov Monastery near the road towards Smolensk and Lithuania . The fords over the Moskva were controlled from the New Maiden Monastery. During raids by the Crimean Tatars, the monastery was burned down by Khan Devlet I. Giray in 1571, and in 1591 it fended off an attack by the Crimean Khan Gazi II Giray.

The main source of power and wealth of the monastery were close connections to respected families, which came about mainly because widows and daughters of princes and boyars went to the monastery and brought in rich donations. After the death of Tsar Fyodor Ivanovich, his widow Irina retired to the monastery as a nun Alexandra in 1598. Her brother, Boris Godunov , was appointed tsar within the monastery walls that same year .

At the beginning of the 17th century, during the Polish - Swedish intervention, there were several occupations by Polish troops before the monastery was finally burned down by the Polish occupiers in 1611. Under Tsar Mikhail Fyodorovich it was rebuilt and strengthened by Strelizen . The heyday of the monastery began with the reign of his son and grandson, the tsars Alexei Mikhailovich and Fyodor Alexejewitsch . The New Maiden Monastery, which was built in the middle of the 17th century. also welcomed nuns from Ukrainian and Belarusian monasteries who were oppressed by Catholic Poland , developed into one of the richest women's monasteries in Russia, which had land not only near Moscow, but also on Lake Onega and the Lower Volga and which had around 36 villages 15,000 farmers belonged.

In 1689 Peter I forced his half-sister Sofia Alexejewna , who was rivaling him for power , to retire to the New Maiden Monastery, where she was ordained a nun in 1698 at Peter's behest as the originator of the failed Strelizre uprising and was given the name Susanna. Peter also had his first wife, Jewdokija Lopuchina (as a nun Jelena) brought to the New Maiden Monastery. Thus entry into the women's monastery was not always voluntary.

With the relocation of the capital from Moscow to Saint Petersburg in 1712 , the monastery lost its importance. At first it was subordinate to an authority, then to the Synod and the College of Economics. The monastery subsequently housed various social institutions, including a military hospital (from 1724) and an orphanage for foundlings. The monastery lands were secularized in 1764.

In 1812 the monastery was occupied and plundered by Napoleon's troops. When they withdrew on the night of October 9, 1812, the French tried to blow up the monastery, but this was thwarted by the intervention of a few nuns.

In 1871 an orphanage for girls was established in the monastery. 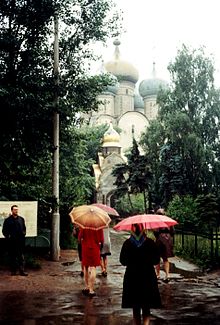 The women's monastery was closed in 1922, and the last church had to cease operations in 1929. The building subsequently housed various organizations. The Neujungfrauenkloster has been a branch of the State Historical Museum since 1934. On June 14, 1944, theological courses were initially set up in the monastery, which were then transferred to an Orthodox theological institute a year later. It was moved to the Sergiev Trinity Monastery in 1948 and renamed the Moscow Spiritual Academy and Seminary.

In 1945 the Assumption Cathedral was reopened to the faithful.

The Metropolitan of Krutitsy and Kolomna has resided in the New Maiden Monastery since 1964, and Juwenali since 1977 , to whom the women's monastery, which was re-established in 1994, is subordinate. The Smolensk Cathedral and part of the buildings belong to the museum. The monastery has a good (Podworje) in the village Schubino (now in the urban district of Domodedovo of Moscow Oblast ).

The architectural development of the New Maiden Monastery took place between the 16th and 17th centuries. The predominant style of these buildings is the so-called Moscow Baroque. The almost square complex is surrounded by a meter-thick wall, which is interrupted on each side by a gate. The need for protection is taken into account by four corner towers and a further eight towers along the wall. The following individual buildings are located on the monastery site.

The earliest construction of the monastery complex is the Smolensk Cathedral, supposedly built between 1524 and 1525 by the Italian architect Aloisio da Milano. It is a traditional cross-domed church with six columns, five domes and three apses. It is surrounded on three sides by a wide gallery, to which roofed staircases were added on the north and south sides in the 17th century. The crypt is in the high basement.

The first frescoes in Smolensk Cathedral were created between 1526 and 1530. They were subsequently renewed several times, for example in 1666 under Boris Godunow by the master of the armory and a few years later by the icon painters I. Jelisarow and F. Karpow under the direction of Simon Uschakow. The icons of the festive series have been preserved from the first iconostasis (1598). Today's gold-decorated carved iconostasis (1683–1685) with five rows was made by masters of the armory (under the direction of Ossip Andrejew, Klim Michailow and Stepan Zinoviev) on behalf of the regent Sofia .

In the center of the cathedral there is a large driven holy water font (1685).

Building ensemble from the 16th century

Buildings from the 17th century 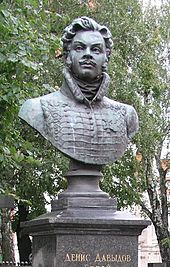 Bust of Denis Davydov's tomb on the monastery grounds

Numerous members of the Tsar's family and other distinguished families are buried in the monastery, for example the daughter of Ivan the Terrible Jelena, the daughters of Tsar Alexei Mikhailovich, Sofija , Ekaterina and Evdokija, and members of the Vorotynski, Golitsyn, Kubenski, Barjatinski, Daschkowitsch families in the basement of the Smolensk Cathedral . The founder of the armory in the Kremlin , the boyar BM Chitrowo, has also found his final resting place there. In the 19th century, non-aristocrats were also buried in the monastery cemetery.

In 1898 a new cemetery of honor, the Novodevichy cemetery , was built on the south wall of the monastery, which was surrounded by a wall until 1904 and expanded in 1949. A number of well-known personalities are buried there, including a. the writers Nikolai Gogol and Anton Chekhov , the painter Valentin Serov , the revolutionary poet Vladimir Mayakovsky , the feminist Alexandra Kollontai , Stalin's wife Nadezhda Allilujewa , the former 1st Secretary of the Central Committee of the CPSU Nikita Khrushchev , the wife of the former President of the Soviet Union Mikhail Gorbachev Raisa Gorbacheva , as well as Boris Yeltsin , the first President of Russia.

Graves of prominent people on the territory of the monastery

Note: Graves in the Novodevichy cemetery, which the monastery is not directly accessible today, are listed here .