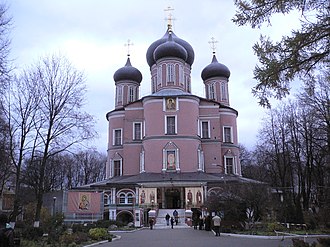 The Great Cathedral of the Donskoy Monastery

The Donskoy Monastery ( Russian Донско́й монасты́рь ) is an important Orthodox stauropegial male monastery in Moscow . It was founded in 1591 and today is an important monument with its sacred buildings and an old cemetery.

It is located a little south of downtown Moscow, not far from the Shukhov radio tower and Gorky Park .

Like a large number of Russian sacred buildings from the early modern period - a prominent example is St. Basil's Cathedral in Moscow - the Donskoy Monastery owes its existence to a military victory by Russia. It was founded in 1591 by Tsar Fyodor as a thank you for Moscow's almost lossless victory over the Crimean Tatar interventions shortly before . It was believed in Russia at that time, victory was originally mainly by the Don Cossacks revered Virgin of Don owe whose icon and in 1380 to the Grand Prince Dmitry Donskoy Muscovites mentioned the miracle of the victory over the Golden Horde brought close to the Don . Therefore Fyodor decided to set up a church south of Moscow as a token of thanks to the Blessed Mother and to have it consecrated to the icon of the Blessed Mother of the Don. With the construction of this first church - today it is called the Little Cathedral of the Donskoy Monastery - the history of the monastery began, which - just like the Grand Duke, who had been victorious two centuries earlier - was named after the miraculous Mother of God. The Little Cathedral was completed in 1593.

The monastery in the 19th century

Around 100 years after the construction of the Small Cathedral, the church now known as the Great Cathedral of the Donskoy Monastery was built near it . At the same time, the monastery was enclosed by a wall with twelve built-in towers that still exists today. Already in the early 17th century the monastery was an important part of the monastery landscape of the tsarist capital. The tsars also took part in the solemn processions on the occasion of the anniversary of the victory over the Crimean Tatars.

In the 18th century, the Donskoy Monastery was already one of the richest of its kind in Russia. He also owned numerous estates outside his territory, including serf farmers. At that time, its architectural ensemble was expanded by several buildings, some of which have been preserved to this day. In addition, by this time at the latest, the cemetery on the monastery grounds was regarded as an elegant burial place for predominantly noble people. Since 1745 one of the first universities in Russia, the Slavic-Greco-Latin Academy , founded in 1687, was located in the monastery area .

Shortly after the October Revolution in 1917, the new anti-religious rulers began to dissolve the monastery, although some of it was used as a monastery until the end of the 1920s. 1922–1923 Patriarch Tikhon , who turned against the communists, was kept under house arrest on the monastery grounds . He died in 1925 and was buried in the Small Monastery Cathedral. After that, the monastery was finally closed and its buildings were mostly used for other purposes.

In 1934, an architecture museum was built on the former monastery grounds, in which, among other things, architecturally important fragments of the sacred buildings destroyed in Moscow in the 1930s were housed. For example, some of the sculptural ornaments from the Cathedral of Christ the Savior, which was blown up in 1931, were transferred to the former Donskoy Monastery. Although the cathedral was rebuilt in 2000, the original sculptures are still in the Donskoy Monastery today.

The church buildings of the Donskoy Monastery were all closed for services in the 1930s. From 1949 only the small cathedral was used again as a house of worship. On the southern part of the former monastery grounds, where expansion areas for the monastery necropolis were established at the beginning of the 20th century, a largely independent urn cemetery was created , which is known today as the actual or the new Donskoy cemetery . At its center was the first Moscow crematorium until 1973 , which was also created by converting a former monastery church.

It was not until the early 1990s that the Donskoy Monastery was returned to the Russian Orthodox Church. Since 1991 it has been used as a male monastery again and services are being held again in most of its church buildings.

The cemetery or the necropolis of the Donskoy Monastery was built at the same time as the monastery was founded and was a preferred burial place for the Moscow nobility, but also for many artists, especially in the 18th and 19th centuries. This also explains the large number of graves of famous people to this day and the unusually large collection of old, historically valuable graves on the monastery grounds by Moscow standards. The neighboring Donskoy cemetery , which was mainly used for urn burials during Soviet times, as the only Moscow crematorium had stood on its site for a long time must be separated from the cemetery of the Donskoy Monastery .