Sally Kristen Ride (born May 26, 1951 in Los Angeles , California - † July 23, 2012 in La Jolla , California) was an American astrophysicist and astronaut . She was the first American woman in space and, after the cosmonauts Valentina Tereschkowa and Svetlana Savitskaya, the third woman to complete a space flight.

Ride was born in 1951 to a political science professor and advisor to a women's prison in Encino , a borough of Los Angeles, California, where she also spent her childhood. Ride attended the Westlake School for Girls, now the Harvard-Westlake School, until 1968. During this time she was a successful tennis player who was promoted by Billie Jean King . She began her studies at the private Swarthmore College in Pennsylvania , but then moved to Stanford University in Palo Alto , where she received two bachelor's degrees in English and in physics in 1973 . Then she specialized in astrophysical issues and laser applications. In 1975 she earned a Masters in Physics and received her PhD three years later .

Ride applied to NASA as an astronaut candidate in 1977 and was inducted into the eighth astronaut group in January 1978. These were the first space travelers to be trained since August 1969 and the first to be appointed to the new space shuttle program. For the first time women were selected by NASA; In addition to Ride, this group included five other women.

After completing her general astronaut training to become a mission specialist , Ride worked as Capcom in the control center in Houston , where she oversaw the shuttle missions STS-2 in November 1981 and STS-3 in March 1982.

Ride completed her first space flight in June 1983 as a member of the STS-7 mission aboard the space shuttle Challenger , becoming the first American to reach Earth orbit. When it launched on June 18, it was 32 years and 23 days old, setting the record that is still valid today as the youngest US spaceman. 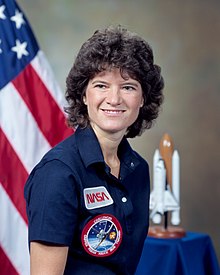 A second space flight followed in October 1984 as part of the STS-41-G mission , also on board the Challenger. In total, she was in space for more than 343 hours. In 1985, Ride was scheduled for a third space flight as a member of the STS-61-M mission, which, however , was canceled without replacement after the Challenger disaster in January 1986.

After the Challenger disaster , Ride and Neil Armstrong were appointed by US President Ronald Reagan to join the investigative commission headed by William P. Rogers . She then moved to NASA headquarters in Washington DC and took over the leadership of a working group that dealt with the long-term planning of future NASA projects (e.g. Mars Pathfinder ). After her death, it was revealed that she had been NASA's internal source of information regarding the defective O-rings, which ultimately enabled the commission to successfully complete the investigation.

In 1987, Ride left NASA to work at Stanford University's Center for International Security and Gun Control in Palo Alto.

After that, Ride resumed her research in astrophysics and finally received a professorship in physics at the University of California at San Diego . From June 1989 she was temporarily director of the California Space Institute at the Scripps Institution of Oceanography in La Jolla . Ride studied high energy physics and worked on theories of plasma and interstellar matter . In 2001 she founded Sally Ride Science, a company that provides educational materials for children about space.

After the crash of the Columbia space shuttle , Ride was appointed to the disaster investigation committee in 2003. She was the only person who belonged to both accident commissions.

Sally Ride is the author of several books on space topics, including the children's book To Space and Back . She was particularly committed to promoting young academics among girls. In the US, due to her popularity, she was a frequent guest speaker at events and occasionally appeared in television shows (e.g. Sesame Street ) and commercials. For her book The Third Planet: Exploring the Earth from Space , she and her friend and business partner Tam O'Shaughnessy received the Science Writing Award from the American Institute of Physics in 1995 .

In honor of Sally Ride, the spot on the moon where the two probes of the GRAIL mission planned to hit on December 17, 2012 was named after her.

In April 2013, the US Navy named the USNS Sally Ride (T-AGOR-28) research ship under construction after her.

In 1994 she became a Fellow of the American Physical Society .

On November 20, 2013, Sally Ride was posthumously awarded the Presidential Medal of Freedom by President Obama .

Sally Ride is mentioned in Billy Joel's 1989 song We Didn't Start the Fire , which lists important events in contemporary history.

Ride was married to astronaut Steven Hawley from 1982 to 1987 . The marriage was childless. From 1985 until her death, she was in a relationship with Tam O'Shaughnessy, with whom she had been friends as a child. They came out only in the obituary. Ride died of pancreatic cancer on July 23, 2012 . Her final resting place is in the Woodlawn Memorial Cemetery in Santa Monica , California.

She is played by Eve Best in the 2013 television movie The Challenger .