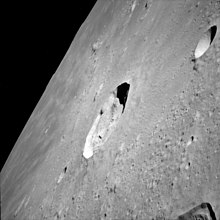 Kepler is a crater on the moon named after the German astronomer Johannes Kepler . Even with a small telescope, it is a very noticeable lunar crater , as it has a ray system similar to Tycho and Copernicus .

Kepler is a striking crater near the lunar equator on the Earth-facing side of the moon. Its center is at 8.1 ° north selenographic latitude and 38.0 ° west longitude , west of Oceanus Procellarum and east of Mare Insularum . Its diameter is 32 kilometers. Its depth measures 2600 meters from the heights of the crater wall. The rim of the crater is somewhat angular due to slipping. The inner slope of the wall is terraced. The central mountain range is only weakly pronounced.

Kepler has a very bright interior and is also the center of a bright ray system .