Viktor Kaplan (born November 27, 1876 in Mürzzuschlag , Styria , † August 23, 1934 in Unterach am Attersee ) was an Austrian engineer . He is the inventor of the Kaplan turbine named after him .

Kaplan was the third child in a railway official's family. His brother Karl was born in Agram in 1871 and his sister Anna Luise in Lekenik in 1873 , also in Croatia. Anna Luise died soon after the birth. Kaplan attended elementary school in Neuberg an der Mürz , the Realschule in Hetzendorf near Vienna and the Wiedner Oberrealschule at Waltergasse 7.As a child and adolescent, he showed noticeable technical talent, including building a camera with distance adjustment from a shoebox and a steam engine on the basis of a cocoa can.

After taking the Matura examination on July 10, 1895, Kaplan studied mechanical engineering at the Vienna University of Technology from 1895 to 1900 . After completing his studies with the 2nd state examination on June 15, 1900, Kaplan did his military service as a one-year volunteer and so-called mechanical engineering apprentice in the kuk Kriegsmarine in Pola on the Istrian peninsula in the then coastal country , now part of Croatia .

His first job as a designer took Kaplan on 25 October 1901 in the Leobersdorfer Maschinenfabrik which to Budapest's company Ganz & Co belonged. There he had the idea of ​​an improved combustion engine with a 23 percent higher efficiency. Since he presented this engine to a meeting of the Austrian Association of Engineers and Architects in Vienna on March 16, 1903, without consulting his boss, he received the notice, which was withdrawn.

Kaplan shared three decades of his life with Brno . Practically all of his inventions were made here. Kaplan completed his habilitation in 1909, and on September 18 of the same year he married Margarete Strasser, who was born in Vienna and with whom he had daughters Gertraud and Margarete. In 1913 he became head of the Institute for Theory and Construction of Water Turbines, and in 1918 he was given a full professorship.

Viktor Kaplan's personality is described as original, nature-loving and humorous. When it came to his turbines, however, Kaplan forgot everything else: for example, shortly before a lecture in tails, he rushed into the laboratory to a test turbine, began to regulate it and was then brought into the ballroom dripping wet.

Kaplan fell seriously ill in February 1922. In 1926 he was awarded an honorary doctorate from the Technical University in Prague. In 1931 he retired after a severe head flu . Kaplan then retired to the Rochuspoint estate in Unterach , which he had acquired in 1920 , where he died of a stroke on August 23, 1934 . Viktor Kaplan found his final resting place in the Rochuspointer family crypt.

Kaplan was an honorary member of the German Reading Hall at the Technical University of Vienna.

Kaplan's main lifelong interest was in water turbines and the energetic use of water power . His invention of the water turbine with - typically: 4 - adjustable blades, which is intended for rivers with large amounts of water and low to medium gradients, goes back to 1912. Kaplan had been working on the turbine since 1910, when Heinrich Storek, then head of the foundry and machine factory Ignaz Storek, had a modest laboratory set up in the basement of the Technical University for his research.

Kaplan's invention initially met with rejection from the established turbine factories . Between 1912 and 1913, Kaplan applied for patents for four of his main inventions, one after the other:

His inventions were presented to the world's largest turbine manufacturers and the public in 1917 as part of his lecture at the Austrian Association of Engineers and Architects. The practical implementation of the results of his research work stood in the way of competition and resistance on the part of German and Swiss companies whose production program was based on Francis turbines . In addition, the implementation was delayed by patent disputes. In addition to the bureaucratic delays, his work was also affected by the beginning of the First World War in 1914.

The world's first Kaplan turbine, with a diameter of 60 cm and an output of 26  kW , was built in 1918 by the Storek company in Brno and commissioned in 1919 in the Börtel and knitting yarn factory in Velm (Lower Austria). This first turbine was used until 1955 and is now in the Vienna Technical Museum . Only with the implementation of a Kaplan turbine with a diameter of 5.7 m for the large Swedish power plant Lilla Edet did the actual global implementation of the new invention begin.

Thousands of Kaplan turbines are currently in use around the world. The share of the Kaplan turbine in global hydropower generation is currently a maximum of ten percent, according to an estimate. ( Francis turbines are used for medium slopes (height differences) and Pelton turbines for large slopes .)

Discovery and research of cavitation

Due to the higher speeds and thus higher blade loads, the cavitation phenomenon, the formation of cavities in the underpressure zones of the turbine, which led to beating noises and corrosion on the blades, impeller chamber and suction pipe, clearly emerged on the Kaplan turbine. The first bad news came in 1922 about a turbine system in Gorizia, almost simultaneously another from Iserthal. From a total of 40 turbines that Storek had delivered by 1922, 10 were affected by cavitation phenomena. Kaplan, already ill, was desperate and suggested making and trying out various blades, which would have taken far too long to do. Neither Prof. Kaplan nor Professors Jaroslav Hybl from the Czech Technical University in Prague and Leopold Grimm from the Czech Technical University in Brno found an explanation. You thought of all sorts of things: sand, acid, an unsuitable guide wheel, etc. a. But one came closer to solving the problem. It was the engineer Gustav Oplusstil, hydraulic engineer from Storek, a graduate of the German Technical University in Brno and a former frigate lieutenant in the Austro-Hungarian Navy, who had practiced at the Whitehead shipyard in Fiume (today Rijeka) before the war. The eaten up turbine blades and fist-sized holes in the suction pipes reminded him of similar phenomena on the propellers of the fast-moving destroyers of the war fleet. One knew from shipbuilding that it was a matter of "cavitations", but without being informed about the exact causes of this problem. Word of the failure of the Kaplan turbines had already got around and therefore urgent action had to be taken to prevent a disaster. A small test turbine was immediately built at Storek, which was installed next to the plant in Iserthal in order to investigate Oplusstil's assumptions. In fact, it was possible to derive measures that led to the correction of the problem. Oplusstil was able to recognize the laws of cavitation and develop impellers that showed no cavitation if they were installed correctly. But not only Storek, but also the group companies examined cavitation problems such as B. the Swedish licensing company Karstads Mekanista Verkstad in Kristineham, which set up a cavitation laboratory. Looking back in 1931, Jaroslav Slavik, Kaplan's excellent assistant, wrote about this exciting period:

"It must be truthfully stated that the Ignaz Storek company in Brno, through their bold pioneering work when introducing the Kaplan turbine into practice, [...] got the hot chestnuts out of the fire."

“Thanks to the tireless investigations in the individual cavitation laboratories, the cause of these mysterious cavitation phenomena could be found out. [...] The Storek company has also achieved great things in this regard. " 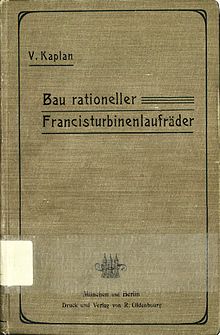 Furthermore, around 70 squares, streets, alleys and paths in Austria and one street in Brno (Czech Republic) are named after Viktor Kaplan. Czech coins and Austrian postage stamps were also dedicated to Viktor Kaplan. Kaplan is shown on the 1000 Schilling banknote from 1961. The Viktor Kaplan primary school in Graz is not far from the turbine manufacturer Andritz AG .

(According to the standard citation rules, footnotes or endnotes are not referred to as individual references, but rather as "comments").