Camillo Sitte (born April 17, 1843 in Vienna ; † November 16, 1903 ibid) was an Austrian architect , urban planner , town planning and cultural theorist and painter. With his internationally acclaimed book Urban Planning According to Its Artistic Principles , he was one of the first authors to deal theoretically and critically with urban planning in the industrial age . Because of his structural and aesthetic proposals for urban design, Sitte is considered to be the “re-founder of urban architecture ”.

Camillo Sitte was the only child of the architect Franz Sitte (born July 8, 1818 as the 19th child of a farming family) from Weißkirchen an der Neisse in Northern Bohemia and Theresia Schabes from Grafenschlag (Lower Austria). Camillo Sitte's professional career is closely linked to that of his father, as he later worked on his father's buildings (he was the construction manager of the "Renaissance Church in Altlerchenfeld, built the priest's hospital in Ungargasse Vienna 3rd district, the towers of the Piarist Church After graduating from the Piaristengymnasium in Vienna , Sitte studied from 1864 to 1869 at the Technical University of Vienna , among others with Heinrich Ferstel , and at the University of Vienna , where he studied archeology , anatomy and Art history occupied. travels took him, among other things to Italy, Greece, France and Egypt. from 1871 to 1873 the custom was at the site office of his father, the Viennese architect Franz Sitte, busy. his local works have him as architects of historicism from. 1875 took over he the management of the Salzburg State Trade School In 83 he taught at the Vienna State Trade School and became its director in 1899. As an urban planner, he developed development plans for small and medium-sized towns (including Privoz / Přívoz 1893–1895, Laibach / Ljubljana 1895, Mährisch-Ostrau / Ostrava 1897, Reichenberg / Liberec 1901) or was active as a juror and expert on urban development projects (including Munich city ​​expansion projects) 1892–1893, Brünn / Brno 1901–1902). Camillo Sitte dealt throughout his life with cultural theory , which should deal with philosophy, art, science and politics. In around 150 publications he devoted himself to a wide range of cultural topics. Among others, he worked on the Austrian specialist magazine Der Architekt . For custom, architecture was a process of culturation. In 1903 he died of a stroke.

Urban planning according to its artistic principles

In 1889, with the publication of his book Der Städtebau nach his artistic principles, Sitte achieved a high reputation beyond the borders of Austria-Hungary . The richly illustrated book introduced the term urban planning into the discussion, using examples from ancient, medieval and baroque cities (“School of the Elderly”) to show the possibilities of artistic urban planning and turning away from the pragmatic, hygienic and traffic-oriented and economic purposes dominated urban planning of his time. He criticized these as an "artistic failure" because of their strong fixation on geometric, mostly right-angled grid systems and the dictation of the lines of flight . He sharply disapproved of the “lack of motivation and sobriety of modern city facilities” by accusing them of “proverbial boredom”. In his book, which was reprinted in quick succession, he presented the "relationship between buildings, monuments and squares" using the example of historical, often Italian, square designs that combine the "artistic" and the "picturesque" with the "technical" Urban development, and followed a treatise on various urban planning systems with the “example of urban regulation based on artistic principles”. “Urban planning as a work of art” must be understood, not “just as a technical problem”.

Grave of Camillo Sitte in the Vienna Central Cemetery

The focus of his considerations was the urban square , which "as the center of an important city symbolizes the worldview of a great people". Central places should be given a “Sunday dress” and “serve to the pride and joy of the residents, to awaken the feeling of home, to constantly develop great noble feelings in the growing youth”.

Customs represented the idea of ​​keeping the middle of the square free, the closedness of squares, the creation of sequence of squares, the urban spatial structure through stairways, arbours, bay windows and colonnades and the use of architectural interior motifs (stairs, halls, etc.) also in the exterior architecture. Sitte emphasized the importance of open spaces, squares, gardens, courtyards and curved streets for a positive, human experience of urban spaces with atmosphere.

Sitte examined the spatial relationships between building and frontal area, square and façade and the transitions between interior and exterior using 297 case studies, of which he sketched 86 himself. Typologically he distinguished between Domplatz , Signora / Schlossplatz , Mercato / Marktplatz and Wagenstandplatz / Parking lot . According to the format, he differentiated the Höhen- / Tiefenplatz from the Breitenplatz, depending on whether the most important, tallest building dominates the square from the narrow side or the long side. Triangular places ("fatal gussets") were just as unbearable for custom as triangular rooms. In sequence of squares such as in Modena , Perugia , Salzburg , Schwerin , Nuremberg or Münster , he showed what he saw as a model of good, irregular urban design. Sitte understood his suggestions as an answer to "our mathematically circumscribed modern life, in which the human being literally becomes a machine himself".

Sitte's book had a great influence on discussions and developments in urban planning around 1900. The planners and architects who took up his suggestions included in particular the German urban planning experts Franz Ewerbeck , Theodor Goecke , Karl Gruber , Karl Henrici , Eduard Kreyssig , Robert Schmidt , Paul Schmitthenner , Alfred von Scholtz , Josef Stübben and Heinz Wetzel . In Cologne , the head of the building department, Carl Rehorst, made Sitte's ideas the guiding principle for urban development and translated them into the cityscape of Cologne's old town when there were large road openings.

Sitte's best-known architecture student was the Austrian Joseph Maria Olbrich . In the area of ​​landscape and open space planning, the German landscape architect Leberecht Migge Sittes took up suggestions. Customs also influenced Raymond Unwin , the designer of the English garden city of Letchworth (1903) and his book Town Planning in Practice (1909). In the Netherlands, Hendrik Petrus Berlage and Marinus Jan Granpré Molière Sitte were close to traditional urbanistic concepts, in Sweden the urban planner Anders Nilsson , in Switzerland Hans Marti . In 1923 the Austrian architect Leopold Bauer wrote : Sitte's book “worked like an initial charge on a prepared mine; the success was tremendous - the topic was taken up everywhere ”. Critics like the Swiss-French architect Le Corbusier dismissed Sitte as an advocate of the “ donkey trail ” because of his preference for the irregular . He was accused of concentrating one-sidedly on aesthetic issues of urban planning and ignoring the complexity of the modern city, that in his “small-scale thinking” he had misjudged the pressure to develop and the space requirements of growing cities. The German art historian and university professor Albert Erich Brinckmann criticized Sitte's urban planning ideas as romanticizing . In 1941, the German planner and university professor Fritz Schumacher added the chapter The Limits of Art in Modern City Plants from Sitte's book to his reading book for builders . As an introduction, however, Schumacher remarked: “Custom (...) sees the artistic still very largely in the ' painterly '; this view has only been overcome very gradually. ”In 1977 the architecture critic Wolfgang Pehnt wrote :“ Camillo Sitte's 'Urban development according to his artistic principles' from 1889 is being read again. ”In 1985 the art historian Hanno-Walter Kruft wrote: Sitte's book“ is for the theory of modern town planning and is currently gaining new relevance after the functionalist town planning theories of the first half of the 20th century had become obsolete. ”Sitte's urban architecture experienced a renaissance, particularly through the designs and publications of the post-modern Luxembourg architects and town planners Leon and Rob Krier . 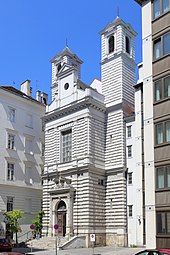 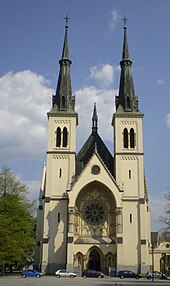 Camillo Sitte was buried in a grave of honor in the Vienna Central Cemetery (group 14 A, number 48). The higher technical federal teaching and research institute Vienna III for structural engineering ( Camillo Sitte Lehranstalt ) in the 3rd district of Vienna Landstrasse was named after him. When the Moltkviertel was built (from 1908), the city of Essen gave a central square its name. In 1913 the Camillo-Sitte-Gasse in the 15th district of Rudolfsheim-Fünfhaus was named after him. In Frankfurt's Praunheim settlement , a road built from 1928 onwards also bears Sitte's name. Sitte received various awards, including the Knight's Cross 1st Class of the Franz Joseph Order in 1903 . He was made an honorary citizen of the Moravian town of Přívoz (Privoz, Oderfurt).

Camillo Sitte was born in Vienna in 1843 as the only son of the architect Franz Sitte and his wife Theresia. He was married to Leopoldine, probably born. Blume (approx. 1853–1925). The son Siegfried Sitte followed him professionally, the son Heinrich Sitte became an archaeologist. Sitte lived at 9 Ungargasse in Vienna , where the architect Carl Wilhelm Christian von Doderer also had an apartment and studio.