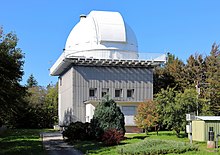 The Leopold Figl Observatory for Astrophysics with the largest reflecting telescope in Austria is a branch of the University Observatory Vienna and is operated by the University of Vienna . It is located on the Mitterschöpfl, a secondary peak of the Schöpfl , at an altitude of 882 m. The observatory is on the municipal boundary between Altenmarkt an der Triesting and Klausen-Leopoldsdorf ; it is also located in the core zone of the Vienna Woods Biosphere Reserve . The observatory is registered under the IAU code 562 .

The observatory was donated to the University of Vienna on the occasion of its 600th anniversary in 1965 by the state of Lower Austria . This happened at the instigation of the then Governor of Lower Austria, Leopold Figl , who, however, did not live to see the opening. Choosing a suitable location was not easy, as clean air, as little light pollution as possible and as many clear, dry nights as possible (no cirrus waves , humidity max. 80%) are required in order to obtain scientifically usable data. On the other hand, the location should not be too far from the associated institute.

The foundation stone was laid on September 13, 1966, the official inauguration and opening on September 25, 1969. 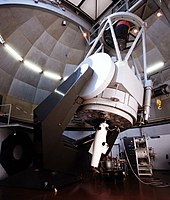 The main instrument is a Ritchey-Chrétien-Cassegrain telescope with a primary mirror diameter of 1.5 m and a focal length of 12.5 m. The telescope is also designed for observation in the Cassegrain or Coudé focus (22.5 m or 45 m focal length), although the Coudé beam path was never realized for financial reasons. The first scientifically usable photo plates were not exposed until December 1970 for organizational reasons.

Next to it is a 60 cm reflector telescope with a 5 m focal length, which was built by the employees of the Vienna University Observatory's workshop (under the direction of Rudolf Pressberger ).

Since 1996 the images have been obtained digitally with the OEFOSC (Austria Faint Object Spectrograph and Camera). Imaging , photometry and spectroscopy can be carried out on the telescope without changing devices.

The observatory is used for the practical training of astronomy students and long-term scientific projects.

The observatory is only accessible to visitors on an annual “Open Day”.

The municipality of Altenmarkt an der Triesting