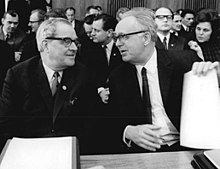 Max Steenbeck (right) together with the then President of the Academy of Sciences of the GDR Hermann Klare , 1970

Max Christian Theodor Steenbeck (born March 21, 1904 in Kiel , † December 15, 1981 in East Berlin ) was a German physicist . He was one of the pioneers of gas discharge physics and constructed the first functioning betatron in 1935 . In 1947 in the Soviet Union he developed a gas centrifuge for separating uranium isotopes and since 1957 has played a key role in the development of nuclear research and nuclear technology in the GDR . He was one of the founders of the electrodynamics of the mean fields, which proved to be the basis for understanding the magnetic fields of the sun , planets and other cosmic bodies and which has gained great importance in astro- and geophysics.

Max Steenbeck was born in 1904 into a family of teachers in Kiel. He graduated from high school in Kiel in 1922 and then studied chemistry and then physics at the university there until 1929. Significant academic teachers were Hans Geiger , Christian Gerthsen and Walther Kossel , in which he with a thesis on the absolute intensity measurement from the beginning of 1929 X-rays doctorate . In the same year he married Martha Witt (born in 1902 in Kiel). The marriage had three children.

After completing the experimental part of his doctoral thesis , Steenbeck joined the scientific department of the Siemens-Schuckert-Werke in Berlin-Siemensstadt as laboratory manager in 1927 , where he then worked without interruption until 1945. At the beginning of 1944 he became technical director and soon afterwards director of the converter plant .

Steenbeck did pioneering work in the physics of gas discharges and plasmas . The two-volume monograph "Electrical gas discharges, their physics and technology" (1932/34) and the extensive article "The plasma state of gases" (1939) written with Robert Rompe testify to this, along with many other publications.

During his work at Siemens & Schuckert, Steenbeck also designed a system for accelerating electrons, the betatron , which worked successfully for the first time in 1935. The achieved energies of the electrons were, however, 1.8 MeV below expectations. Other priorities of the work prevented further developments in this area. Incidentally, the work on the Betatron was classified as a company home. Several patents were applied for, but the results were only published in a scientific journal in 1943 with an article in "Natural Sciences". A special achievement by Steenbeck was the formulation of a condition for the spatial course of the magnetic field in the betatron, which guarantees the stability of the electron trajectories.

The first ideas for a betatron-type accelerator had already been formulated by Rolf Wideröe in 1928 . Later, in 1940, Donald William Kerst at the University of Illinois also constructed a betatron. He mentioned Wideröe in his publications, but not Steenbeck, although his patent from 1937 should have been known. Immediately before the Japanese attack on Pearl Harbor in December 1941, Siemens issued a betatron license to General Electrics in the United States, which held Kerst's patents.

One motivation for the construction of betatrons were applications in medicine, especially radiation for cancer therapy. After Kerst's success became known, Konrad Gund built a new betatron in Erlangen at Steenbeck's suggestion from 1942, which was put into operation in 1946 in Göttingen for medical purposes.

In 1927/28 Steenbeck also had the idea for the cyclotron (and for the synchro-cyclotron) and, at the urging of colleagues, prepared a publication about it, which however did not come about due to a misunderstanding.

In connection with work on high-voltage rectifiers, Steenbeck developed the X-ray flash tube in 1937 , which allows the visual representation of very fast processes.

One of the remarkable findings of this creative period is the minimum principle found by Steenbeck in the physics of the electric arc .

During the Second World War, Steenbeck also dealt with the detection and defusing of magnetic sea mines.

Steenbeck considered various options to switch to a university job, but ultimately did not take advantage of any of them.

After the Red Army marched into Berlin, Steenbeck was arrested in April 1945 and initially taken as a civilian prisoner to a camp in Posen (Poland), where he had to live in terrible conditions and was soon close to starvation. After the American atomic bombs were dropped on Hiroshima and Nagasaki in August 1945, the Soviet government decided to press ahead with its nuclear program by all means, including the help of scientists from defeated Germany. So he was first brought to Moscow, where he was able to relax a little and then came to Sukhumi on the Black Sea, where around 100 German specialists already lived and worked under relatively good conditions, including Nobel Prize winners Gustav Hertz and Manfred von Ardenne . Some of them had their families there; Steenbeck's family also came to him in early 1946.

Steenbeck put together a group of employees who dealt with methods for separating uranium isotopes . From the end of 1947 he pursued the idea of ​​a gas centrifuge and developed a very successful version of it, first in Sukhumi and later in Leningrad (today's St. Petersburg). So the Soviet Union came into possession of the most modern technology for isotope separation at the time.

After their work in the nuclear program, the German specialists were allowed to work on other topics in other parts of the Soviet Union for a few years, so that when they returned to Germany they no longer knew the latest developments in the nuclear program, which would have meant a security risk. With this in mind, from autumn 1953 Steenbeck worked at the Physical Institute of the Ukrainian Academy of Sciences in Kiev on semiconductor problems .

In the summer of 1956, Steenbeck and his colleagues were able to return to Germany. Free in his decision to settle in the Federal Republic of Germany (FRG) or in the German Democratic Republic (GDR), he also chose Jena in the GDR as the new place of residence for himself and his family for political reasons.

One of Steenbeck's employees on the centrifuge project was the Austrian Gernot Zippe . Originally a prisoner of war in the Soviet Union, he joined this group in the summer of 1946. He went to the Federal Republic of Germany in 1956 and later spread the idea of ​​the centrifuge in the western world. The system he further developed became the basis for a British-Dutch-German cooperation that began in 1970 in the separation of uranium isotopes.

Scientific activity after returning to Germany (1956–81)

From his return in 1956 to 1960, Steenbeck headed the Institute for Magnetic Materials in Jena. On his initiative, the Institute for Magnetohydrodynamics split off from this in 1959, which initially dealt with contributions to the then believed close energy generation by hydrogen fusion and to the so-called magnetohydrodynamic generators . From 1959 until his retirement in 1969, Steenbeck was director of this institute. At the same time, he had held a professorship for plasma physics at the Friedrich Schiller University in Jena since 1956 .

Steenbeck also had a significant influence on the development of nuclear research and nuclear technology in the GDR. In addition to the aforementioned obligations in Jena, he was head of the Scientific and Technical Office for Reactor Construction in Berlin from 1957 to 1962, an institution that also supported the construction and operation of the GDR's first nuclear power plant in Rheinsberg .

Electrodynamics of medium fields and the magnetic fields of cosmic bodies

Steenbeck was very interested in understanding the electromagnetic processes that take place in the earth's interior and maintain the earth's magnetic field, or that take place in the sun and are responsible for the sunspot cycle, which is clearly linked to magnetic phenomena. At the Institute for Magnetohydrodynamics he worked from 1960 on with a very small group of younger employees on such topics. In this context, the electrodynamics of the mean fields in turbulent moving electrically conductive media, based on classical physics, arose, which today is generally recognized as the basis for the explanation of magnetic phenomena in cosmic objects and has found many applications in astro- and geophysics. A central finding is that turbulent movements of an electrically conductive medium on a rotating body under certain conditions lead to the creation of magnetic fields according to the principle of the self-excited dynamo , which is well known in technology . A first presentation of the basic ideas of this branch of science was published in 1966, the first dynamo models for the sun and planets were presented in 1969. An essential statement of the electrodynamics of the middle fields was proven back in 1967 by a laboratory experiment carried out in Riga (Latvia) with liquid sodium. Two large-scale experiments in Riga and Karlsruhe (Germany), in which a dynamo could be detected in a flow of liquid sodium, were unfortunately not successful until 1999, long after Steenbeck's death.

The developments described, which can be assigned to basic research, have also produced results of great practical importance. They highlighted the hitherto overlooked danger of self-excitation of magnetic fields in the large liquid metal circuits of a type of nuclear reactor, the fast breeder , including the possible catastrophic consequences and showed ways to avoid them. In a memorandum to the Soviet Academy of Sciences in 1971, Steenbeck drew attention to this danger and thus initiated further investigations into this problem.

Scientific and political activity (since 1957)

Steenbeck expressed himself in numerous writings on science-political topics, e. B. on the importance of basic research and the responsibility of a scientist in society.

The sad experiences of his life prompted him to become politically active again and again. After his return from the Soviet Union he decided to work in the GDR because he believed he could do more there than anywhere else in Germany for a better, more peaceful and humane world. From 1970 he worked as President of the GDR Committee for Security and Cooperation in Europe and in this capacity took part in the conferences on this topic in Helsinki. He was a member of the Presidium of the GDR Peace Council . 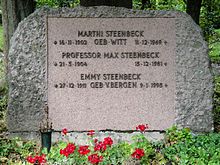 Steenbeck received the GDR national first class prize for science and technology in 1959 for the invention of the betatron and contributions to plasma physics and a second time in 1971, together with three younger scientists, for work on the creation of cosmic magnetic fields. The Soviet Academy of Sciences honored him in 1972 with the Lomonosov Gold Medal . In 1977 a group of scientists who had rendered outstanding services to energy problems, including Steenbeck and Zippe, were awarded the Alfried Krupp von Bohlen und Halbach Prize for Energy Research .

Steenbeck was awarded an honorary doctorate from the Friedrich Schiller University in Jena in 1964 , and he had been an honorary citizen of the city of Jena since 1969. A grammar school with extended mathematical, scientific and technical training in Cottbus bears his name.