Clemens Alexander Winkler (born December 26, 1838 in Freiberg , † October 8, 1904 in Dresden ) was a German chemist . He is the discoverer of the chemical element germanium .

Clemens Winkler was born as the second eldest son of the three sons and three daughters of the metallurgist Kurt Alexander Winkler and his wife Elmonde Winkler née Schramm. He was a nephew of the mineralogist August Breithaupt and cousin of the geologist Hermann Theodor Breithaupt . His godfather was the chemist Ferdinand Reich . The chemist Ferdinand Bischoff was his brother-in-law. 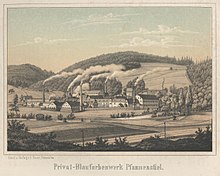 After initially receiving private tuition with his siblings, he went to the grammar school in Freiberg at the age of twelve, from which he switched to the secondary school in Dresden and after two years to the trade school in Chemnitz . After his stay at the Chemnitz trade school (1853-1856) he began studying at the Freiberg Bergakademie (1857-1859), but broke it off after two years at the request of his sick father. He first worked as a chemist in the Oberschlema blue paint factories and, after his father's death in 1862, in Niederpfannenstiel . He then founded a family with Minna Pohl in Pfannenstiel, which resulted in four sons and two daughters. In the following two years, he published nine works and was in 1864 for his work About Siliciumlegirungen and silicon metals arsenic at the University of Leipzig PhD ; In the same year he became a smelter in the Niederpfannenstiel blue paint factory .

On the recommendation of Hermann Kolbe , Clemens Winkler was appointed to succeed Theodor Scheerer as professor of inorganic chemistry at the Bergakademie Freiberg in 1873 , although he had not previously taught as a smelter. His first work was on mineral analysis; Winkler used electrical analysis for the weight analysis of types of metal. Winkler introduced the platinum wire mesh electrode in 1898 and is considered a co-founder of electrical analysis .

Old chemical institute of the Bergakademie Freiberg around 1900

Laboratory in the old chemical institute in Freiberg around 1900

As early as 1831 in England, Peregrine Phillips had received a patent for the production of sulfuric acid from sulfur dioxide through contact with platinum. Winkler developed platinum-coated asbestos for the same purpose and obtained a very high yield of sulfuric acid. In 1876 a sulfuric acid factory was established near Freiberg. Winkler was a co-founder of the contact process and recognized arsenic as a contact poison that worsened the effectiveness of the catalyst. The BASF chemist Rudolf Knietsch later developed the process further and it found worldwide recognition.

Winkler improved Robert Bunsen's gas analytical methods and simplified them to such an extent that they were widely used in industry; he developed the gas burette named after him and, together with the chemist Walther Hempel, is considered to be the founder of technical gas analysis .

Winkler's grave in the Trinitatisfriedhof in Dresden

Winkler's most important achievement was the discovery of the element germanium on February 6, 1886. When analyzing the rare mineral argyrodite , he found that this consisted of approx. 75 percent silver , 17 percent sulfur and small amounts (approx. 1 percent) consisted of iron , mercury and zinc . Now there were still seven percent missing to the whole. After several months of work, Winkler was finally able to isolate a new element with the help of the Freiberg exposure, which he called germanium - based on the naming of the elements gallium and scandium . His discovery confirmed the theoretical work done by Dmitri Ivanovich Mendeleev , who had predicted the existence of an element he called eka-silicon with these properties.

In 1894 he first met Mendeleev, with whom he had been in correspondence since 1886. From 1896 to 1899 Winkler was director of the Bergakademie; He declined appointments to other universities. He died in 1904 at the age of 65 years to cancer .

Clemens Winkler was a member of the Weinheimer Corps Franconia Freiberg . He is buried in the Trinity Cemetery in Dresden.