This article explains the xenon light in the headlights of motor vehicles , for other uses see Xenon gas discharge lamp .

In motor vehicles, xenon light refers to the use of a xenon gas discharge lamp in the low beam or high beam . 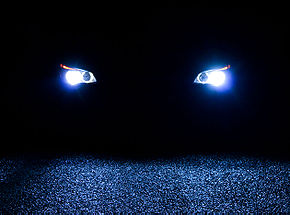 In 1989 Philips developed the D1 lamp, which was later also offered by Osram . From 1991 gas discharge lamps (Bosch Litronic) were available as xenon lights for the 7 Series BMW , initially only as low beam. The D2 lamp has been used in the Audi A8 and the BMW E38 since 1994 ; it is still produced today in a slightly modified form. Since 1999, first in the Mercedes-Benz CL , there have also been xenon high beams in so-called bi-xenon headlights . The same lamp is used for the low beam and high beam, whereby a diaphragm is folded out of the beam path for switching, thus enabling high beam. There are also xenon headlights with integrated cornering lights , which are intended to achieve improved illumination when cornering thanks to horizontally movable lenses.

In 2007, 30% of the new passenger cars in Germany were equipped with xenon headlights, according to the 2008 DAT report, around 15% of the total number of cars. In addition to xenon and halogen headlights, they are still state of the art and account for a high proportion of new registrations. In 2015, 38% of new registrations, 20% of used vehicles and 24% of the vehicle fleet were equipped with xenon lights. The equipment rate in the lower vehicle classes is lower than in the upper class.

In the case of buses for travel, the equipment quota for new registrations is high, while it is low in the case of trucks and buses . 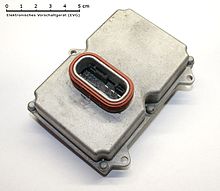 Between two tungsten - electrodes of the xenon arc lamp burns a concentrated arc . The extremely small combustion chamber - a glass bulb made of quartz glass - contains a xenon gas filling under high pressure as well as mercury (see below for differences in lamp categories ) and metal halides - less than a milligram in total. The metal halides are present for color rendering enhancement. The xenon gas is for a considerable luminous flux shortly after ignition and u. a. responsible for quickly starting the lamp, which plays an important role in traffic. In conventionally used metal halide lamps, argon is usually used as the starting gas, with which, however, it takes several minutes to deliver a significant luminous flux or to achieve the entire amount. Strictly speaking, the xenon burner is therefore a combination of a xenon gas discharge lamp and a metal halide lamp . Newer versions do not contain any mercury in the filling.

The shelf life of xenon lamps is around four times that of halogen lamps. Since xenon lamps are gas discharge lamps, however, defective burners cannot be identified by a burned-out filament.

So that the gas discharge lamp can be used on motor vehicles in traffic, the known slow light start-up must be accelerated. The process required for this can be described in three phases:

Technical details of a xenon lamp require an electronic ballast. These ballasts are designed as control devices for 12 and 24 V electrical systems and can operate burners with 25, 35 or 50 W. A voltage pulse of up to 25,000 volts is used to ignite the lamp, also known as the burner  . A period of up to 15 seconds may be necessary before the full luminous flux is achieved. The approval criteria for motor vehicles require that at least 25% of the target luminous flux is achieved after 1 second and at least 80% of the nominal luminous flux after 4 seconds after switching on without delay (ignition). With a warm start, 80% of the target luminous flux must be achieved after just one second after instantaneous ignition. It can take up to 30 seconds until the operating color temperature is set.

The arc increases the pressure of the xenon inert gas filling in a burner from around 20 bar (2 MPa) to up to 100 bar (10 MPa) during operation. In normal operation, the lamp is often operated with around 85 volts at 400  Hertz square wave . Newer mercury-free lamps operate at around 42 volts. The electrical operating parameters depend on the total operating time (service life) and the condition of the lamp (cold, warm, hot). The coordinates in the CIE standard valence system of a lamp (color location, temperature) change with increasing overall lamp life. The UV components generated during ignition are filtered through a UV-absorbing layer or doping of the burner in order to avoid damage to other components (e.g. polycarbonate lenses). The ballasts generate an alternating voltage from the vehicle electrical system using power electronics . The discharge current of the light plasma is controlled by them - regardless of the supply voltage. The efficiency of these ballasts is around 90%. With the so-called plug starters, the ignition unit is as close as possible to the lamp unit to avoid EMC problems.

Motor vehicle xenon lamps are line emitters (see also light spectrum ), the spectral lines of which, however, almost merge into a continuum due to pressure broadening and additives. Some lines are also in the ultraviolet range. The mixture of the lines results in the apparent color - it is bluish than the light from halogen filament lamps. Halogen lamps emit a continuous spectrum that extends far into the infrared range; a normal incandescent lamp emits around 85–95% of its output as heat, only 5–15% is available as light (→ incandescent lamp , halogen incandescent lamps are somewhat more efficient in this regard). The light from a xenon lamp appears colder than that of an incandescent lamp due to its higher color temperature , but is brighter despite the lower power consumption. Newer, low-mercury lamps also contain sodium, which leads to a lower color temperature and makes the light appear warmer.

Halogen bulbs sold with the additional designation “Xenon” either have a color filter ( interference filter ) vapor-deposited onto the bulb to make the light appear bluish, or the glass bulb itself is made of blue glass in order to imitate the higher color temperature of xenon discharge lamps. By cutting the spectrum to include long-wave components, the overall light yield is somewhat reduced.

Xenon lamps are divided into the ECE categories D1, D1S, D1R, D2S, D2R, D3S, D3R, D4S, D4R and D-H4R. The abbreviation D stands for Discharge (discharge), the following point for the respective development version. Burners with the specification DxS are used in headlights with projection systems. They have a clear glass bulb. Burners with the specification DxR are used in reflector headlights and have an opaque print (pinstrip - also known as a shadow coating ) on the glass bulb. It serves to guarantee the officially prescribed light distribution.

Xenon lamps with the designation D1 are the first xenon lamps to be developed. Only these, in contrast to all other development stages, do not have an outer glass bulb protecting the discharge tube. All further developments of this type have a UV protective flask. They are also much more stable in terms of their design. The old D1 is very often confused with today's D1 S / R burners, which contain an integrated ignition module. When we speak of a D1 lamp today, we usually mean the current design with an integrated igniter.

The use of xenon light is controversial, also due to the higher acquisition costs both when buying a new car and when replacing defective light sources. However, the latter costs are put into perspective by a significantly longer service life compared to halogen lamps. The higher light output, the larger illuminated area and the contrast-enhancing effect in good visibility are advantages that increase traffic safety, but initially only benefit the driver and are only standard in a few vehicle models.

According to a study by TÜV Rheinland, widespread use of xenon light would prevent 50% of serious accidents at night on country roads and 30% of serious accidents on motorways (and thus 18% of fatalities). This study is based on official figures from the Federal Highway Research Institute, but was commissioned and financed by an initiative of European lighting manufacturers without this fact being openly disclosed in the published material. It was not determined whether, and if so, how many additional accidents due to glare could be expected.

When measuring above the headlight axis, xenon light must not dazzle more than conventional halogen light. If the headlights are set incorrectly or in certain driving situations (driving over a hilltop or a bump or if the xenon high beam is inadvertently switched on in oncoming traffic), the glare effect is significantly higher than with halogen headlights. An oncoming driver usually finds this uncomfortable. Since a higher luminous flux of the luminaire means an increased glare effect on wet roads, any improvement from the driver's point of view is at the expense of the oncoming.

Regulations for retrofitting in motor vehicles 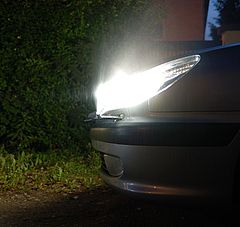 The following applies to all lighting equipment on motor vehicles: The type of light source (e.g. incandescent lamp, halogen lamp, xenon lamp, LED) is always part of the type approval of a headlight. It follows: