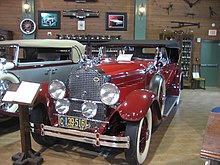 Pilot Ray cornering light on a Packard Deluxe Eight Dual Cowl Phaeton from 1929. The steering linkage is visible under the fender.

Cable-controlled headlights in the Citroën DS

A first cornering light was offered in the Cadillac Type 57 in 1918 . In 1926 the inventor George S. Keck from Pasadena (California) applied for a patent for a dirigible headlight for automobiles and the like. He then worked with the Pilot Ray Corporation of America in Wilmington (Delaware) , for which he worked out further patents. Pilot Ray Self-Steering Automatic Safety Lights could be installed individually or in pairs on a pole in front of the radiator grille. They appeared on the market around 1928 and were offered for retrofitting in the accessories trade as well as being listed in their catalogs by many automobile manufacturers. In 1931 Charles M Cronkhite filed a further patent.

Tatra built a cornering light into the Tatra 77 and later into the Tatra 87 in 1935 . The Tucker '48 , which was only produced in a small series from 1948, had a third headlight in the middle, the so-called "Cyclops eye".

From September 1968, cornering lights were again used as standard in the DS by Citroën in Europe . The high beam headlights were steered via a cable that was connected to the steering .

The 1970–1975 produced Citroën SM had - unlike the Citroën DS with its cable actuation of the inner headlights - a hydraulically operated cornering light at this point, which also enabled the headlights to move around the transverse axis (to compensate for pitching movements). The headlight battery of the SM, developed in collaboration with Cibié , works with six main headlights. The outer larger ones are combined classic headlights. In the direction of the center, wide-spread dipped beam lights follow for the close range. Right on the inside, on both sides of the license plate, are the high-beam headlights that not only follow the steering but also swivel slightly ahead in the angular degrees. This results in a curve illumination that can also cover the area of ​​the curve end.

In the 1960s, for safety reasons, the legislature forbade swiveling the low beam . It was not until 2002 that the corresponding ECE regulations were changed again.

Since then, various vehicle manufacturers have been offering cornering lights (mostly only in conjunction with xenon lights ), for example: Audi , BMW , Renault , Citroën , Mercedes-Benz , Opel , Seat and VW . In order to emphasize the three-dimensional mobility of the light cone, one often speaks of adaptive headlights. The manufacturers Peugeot , Ford , Škoda , Opel and Renault now also offer cornering lights with halogen headlights, for example in the Peugeot 207, the Ford Focus, the Škoda Fabia, the Opel Corsa and Meriva as well as the Renault Clio. Among other things, VW has been offering cornering lights with LED headlights in the VW Passat B8 since 2014 .

For some time now, car manufacturers have been offering improved cornering illumination, mostly as optional equipment, using fog lights that illuminate individually depending on the situation . This is often referred to as cornering light or static cornering light in order to emphasize a differentiation from the headlights that swivel along with it. Below 40 km / h and after activating the direction indicator or at a certain minimum turn of the steering wheel, the left or right fog light is automatically switched on, which illuminates the nearby ground better, for example on Audi , BMW , Mercedes-Benz , Peugeot , Citroën , Škoda and VW . Some manufacturers also install swiveling reflectors in the fog lights.

Cornering light integrated in the headlight

Some car manufacturers such as Citroën or Opel offer cornering lights integrated in the headlights. At Opel it's called AFL or AFL +. At low speeds or when the vehicle is stationary and the turn signal is activated, an additional lamp is switched on in the headlight according to the direction, which also illuminates the ground better here. This has the advantage that oncoming traffic is not irritated or distracted, as can be seen, for example, in other constructions, especially in roundabouts.

AFL headlights of the Opel Vectra C are active

A distinction is made between static and dynamic cornering lights. A combination of both versions is also permitted.

The static cornering light should not be confused with the additional side headlights installed on some American vehicles, known in America as the “cornering lamp”. These only switch on and off when the direction indicator (blinker) is activated. The US legal lighting requirements also differ from those in the ECE regulations .

With more and more vehicle types, cornering lights are available as standard or at an additional cost. It is currently only available for retrofitting for a few models (e.g. for VW Golf V, Opel Astra H, Ford Focus I from Hella ).

For both versions of the cornering light, the speed , the steering angle and the yaw rate form the basic input variables , which are calculated in a special algorithm . This takes place in a control unit of the vehicle electronics. The control unit then forwards the necessary signals to the actuators .

To implement the cornering light function in a vehicle, additional lighting equipment and control units are necessary. The existing equipment for automatic headlight range control (sensors, algorithms, servomotors) cannot be used, as they can only adjust the light distribution vertically.

When the vehicle is stationary, the dynamic cornering light must not react to a left steering wheel (applies to right-hand traffic, left-hand traffic accordingly). The background to this is that oncoming traffic should be avoided.

The cornering light may only be active at a speed below 50 km / h.

BMW K 1600 GT with mirror for the adaptive headlights

On motorcycles, the dipped beam lights up when cornering due to the inclined position to the opposite side, which means that the road can only be illuminated very poorly even at a slight incline. This is very important when turning or driving on a roundabout. Since the steering angle, unlike in multi-lane vehicles, is not directly related to the curve radius, the inclined position is used for control. However, since this can only be determined with great effort using a gyro system, adaptive headlights have only been implemented in luxury-class tourers so far. Either additional lights are used, as on the Yamaha FJR1300 , or the inclination is compensated for by a mirror system, as on the BMW K 1600 GT .

Opel is working on a front light that doesn't dazzle. It should have a front camera. Instead of moving parts, different LEDs are controlled and dimming takes just 20 milliseconds and not 250 milliseconds as before. In the VW Phaeton a new system comes from Valeo used.

With the LED system, the lighting field can be designed differently in different areas, for example in order not to dazzle oncoming traffic and still achieve a large-area illumination of the remaining field.