An H4 halogen lamp, a so-called two-filament incandescent lamp with filaments for high beam in the middle and low beam on the right in front of the sheet metal cover 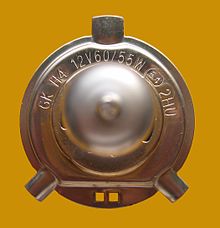 Coding of the H4 lamp, which is intended to prevent incorrect alignment in the reflector

The high beam (also high beam ) is part of the vehicle headlamp and motor vehicles in the road as a headlight adjacent to the low beam mandatory. On the one hand, it serves to further illuminate the lane / traffic signs and as a signal transmitter.

The high beam is switched on by actuating the lever as a permanent light for better illumination of the road or it is briefly pressed as a light signal (headlight flasher) to warn other road users.

White high beam is not helpful in fog or snowfall - it then leads to self-glare. For this case, there are fog lights that can also shine in light yellow and are mounted lower than the high beam.

When the high beam is switched on, § 50 of the Road Traffic Licensing Regulations

Portions of this article appear since 2006 is out of date to be .
Please help to research and insert the missing information .

Wikipedia: WikiProject Events / Past / 2006a blue control lamp lights up in the driver's field of vision. In the past, with a special permit, it was also permitted to use a yellow LED as a control lamp , for example on VW and Audi models from the 1970s and 1980s.

The high beam function is achieved on the one hand with two filaments in a common bulb like the H4. The often used name Bilux is a brand name of Osram . One incandescent filament with a nominal output of 55 watts behind the inner reflector of the lamp is for the low beam and the other exposed filament with a nominal output of 60 watts for the high beam. Only one lamp and one headlight is then required, or one on each side in the case of two-lane vehicles. If only one of the two filament has burned out, the entire lamp must be replaced. Because of the longer burning time, the filament of the low beam is mainly defective first.

With two separate headlights, where the low beam is constantly on and the high beam can only be switched on, lamps with a filament such as the H7 with a nominal output of 55 watts are sufficient.

Because of the additional load placed on incandescent lamps with two filaments, the low beam is switched off when the high beam is switched on. Some vehicles also do this when the engine is started in order to prevent the battery voltage from dropping further.

The high beam is mainly used when it is very dark and a road that cannot be seen far enough is being driven on. Since, for safety reasons, you can only drive on a road so fast that you can stop within the visible route, the area extended by the high beam enables faster driving.

The permanent high beam may be used if

The headlight flasher is a device that can be used to briefly switch on the high beam or high beam filament in order to generate a short and strong beam of light.

In Germany, the use of the headlight flasher is permitted under the following conditions:

No statement can be made here regarding the admissibility of the following, at least usual, uses of the headlight flasher (is this a "hazard"?):

“The left-turning person who has to wait must not conclude from a signal from the headlight flasher in the dark from an oncoming vehicle driver in straight-ahead traffic that he is giving up his right of way, even if the person with priority has previously reduced his speed. The privileged person does not create a clear traffic situation by decelerating his vehicle alone and issuing a flasher signal for the oncoming left-turners "

The use of the headlight flasher is prohibited (but common) on the following occasions:

Motor vehicles with a design speed of more than 50 km / h must have a device for emitting clearly perceptible, short flashing signals, which can also be operated if you hold the steering device with both hands. It usually has to be two symmetrically positioned headlights. Motorcycles, even with sidecars, as well as motor tricycles and motor four-wheelers with a width of no more than 130 cm only need one headlight. ( Section 22 (2) KFG  1967)

As with the horn or shouting, the driver may warn by flashing signals, provided that it is sufficient and does not dazzle. ( Section 22 (1) StVO 1960 ) Only short flashing signals may be given and this may not be done over a longer period of time, as is the case with unauthorized driving and jostling. Also, no other means may be used for this purpose (with the exception of emergency vehicles and the alarm flasher system intended for continuous operation ) n ( § 100 KFG 1967).

In 1988 the Administrative Court ruled that warning signs with a flasher are forbidden in accordance with Section 22 of the Road Traffic Act if “traffic safety does not require it”, it decided on October 30, 2006, explicitly against its previous case law. The Constitutional Court has stated several times that the legislature has to state unequivocally where it wants to punish. The paragraph only deals with honking and thus there is no legal basis to punish flashing signals afterwards. Warning other road users with the headlight flasher before radar measurements are therefore not punishable unless you blind someone with it.

Even if it is not forbidden, pressing the headlight flasher does not result in a legally valid waiver of priority. A person subject to waiting must not assume that a person entitled to priority will waive his priority unless it is really clearly recognizable. ( Section 19 (8)) If the driving speed is merely reduced or the traffic situation is unclear, no waiver may be assumed. The waiver of one person with priority must not be taken to mean the waiver of another person with priority (Section 19), even if the second person behaves contrary to the regulations (e.g. no passing by).

Within the scope of the technical specifications for interoperability , rail vehicles must be equipped with a triple headlights in the form of an A. It only serves to make the train visible and to warn other road users of the approaching train. It is therefore only relatively weak. In addition, new rail vehicles must be equipped with headlights that ensure the driver's view and can illuminate the route for a few hundred meters in the dark. This allows (reflective) signboards or hazards on the route to be recognized earlier. From a single light is in the dimmed state, a light intensity from 12000 to 16000 Candela , required in the displayed high beam from 40,000 to 70,000 candela.

The rules for using the high beam are roughly the same as those for road traffic. In the Deutsche Bahn network , the group guideline 492.0001 "Driving traction vehicles - principles" regulates the use of the high beam: "When you stop at passenger traffic facilities, when you encounter vehicles and when driving through stations, switch off the high beam." If this regulation is implemented consistently, a Glare from oncoming rail vehicles and other road users can be excluded. If roads run parallel to the railway line over a longer distance, e.g. B. on the high-speed route Cologne – Rhine / Main , glare of road users from locomotives cannot be completely ruled out. In this case, the driver's caution is required.

Combined headlights with dipped and high beam were also used for bicycles. It was realized either with two incandescent lamps or with a bilux lamp. Today this is no longer customary and also not mandatory.