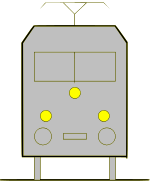 Early use on the Berlin Stadtbahn around 1900, here on a class T 2 locomotive 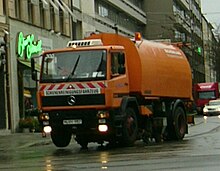 With the conversion to digital target displays, third headlights were mostly retrofitted (right) 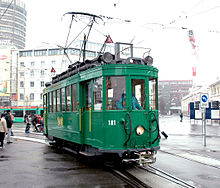 The three-light peak signal is a railway signal for leading locomotives and control cars as well as railcars in almost all of Europe. Analogous to the peak signal, there is also a final train signal . In Germany on the DB network, according to the guideline, the headlights must be worn on trains during the day and in the dark. It must also be worn if unsecured level crossings are used when shunting. Individual vehicles or shunting locomotives in Germany can carry a white signal light at the front and rear at buffer height. See signal Fz 1.

Before the general introduction of the three-light peak signal, it was common in Germany for two white lights to be located on the Zugspitze. The Berlin steam light rail, which opened in 1882, and the Vienna steam light railway, which opened in 1898, were equipped with triple headlights at a particularly early stage . A third signal support on traction vehicles up in the middle of the vehicle was there very early, for example for the wrong-way or special train signal. The signal book of the Deutsche Reichsbahn from 1935 contains the three-light spike signal as a signal Zg 7 , counter- train signal ( a special train is coming from the opposite direction ), which is rarely used .

The decisive factor for the general introduction of the three-light peak signal on rail vehicles was the increase in road traffic with motor vehicles. In particular, on branch lines that ran alongside country roads, mix-ups, through which motor vehicles got into the track, could lead to serious accidents.

In the area of ​​what was then the Federal Republic of Germany, however, it was only made mandatory on September 1, 1957 with the entry into force of the Spitzensignalverordnung of July 26, 1957 ( Federal Law Gazette II p. 1268 ). A transition period of two years (for railway lines with non-technically secured level crossings ) or four years (for lines with technically secured level crossings and lines without level crossings) was planned. During this transition period, either only the old or only the new signals could be used on such a route.

In Germany, the triple peak signal in its current meaning was first mentioned in the signal book of 1958 (Deutsche Reichsbahn) and 1959 (Deutsche Bundesbahn), the general introduction extended over a longer period of time. The DR signal book in the 1958 edition stipulated that the signal, which was designated Zg 1a at the time, was only to be carried on routes with crossings without technical security by order of the Reich Railway Directorate.

In tram and light rail networks that are operated according to the BOStrab , a three-light peak signal is also prescribed there, although the third light of the peak signal can contain the line designation or the train destination. In practice, it took several decades before tram railcars were generally equipped with two headlights.

For more information on the design of the signal lamps see under locomotive lamp .

Today, the electrical signal lights on rail vehicles are regulated in UIC Code 534 (signals and signal supports for locomotives, multiple units and multiple units). Two electrical signal lights must be attached to both end walls at the same height between 1.5 and 1.7 m above the upper edge of the rail ( also higher for the Norges Statsbaner ); the horizontal distance should not be less than 1.3 m. With DB AG , DSB , MÁV , NS , ÖBB and SBB , a third signal light is also required in the top center (height not specified).

The three-light peak signal is the night signal "Zg 1", which German trains have to use on their vehicle in front. The execution of the signal is subject to the provisions of § 14 EBO , substantiated by the Railway Signal Regulations (ESO) and regulated with implementation provisions in the signal book .

Section XII. the ESO "Signals to Zügen (Zg)" designates the "Signal Zg 1 / Spitzensignal" as "marking the Zugspitze" and initially stipulates that no special signal is given as a day signal. A distinction is made between two cases for the night signal:

With the night signals, an approaching train should be recognized in the dark and clearly differentiated from road vehicles. The night signs are also to be used during the day.

In the signal book DV V 2 of the ÖBB , the headlights are listed under section XIII. "Signals on trains and vehicles" listed. There it is under § 30 “Train signals; Peak and tail signal ”is described as“ three white lights in the shape of a triangle with the tip pointing up ”. It is used to identify the first vehicle on a train or side journey.

The peak signal is used to make it easier to distinguish road users from rail vehicles. In addition, approaching rail vehicles should be recognized more quickly at level crossings.

In the area of ​​Austrian trams, the signal bears the designation "Z 1" (headlights), whereby the headlight (above) may contain the line designation of the train. The lower lights must be headlights and together form an isosceles triangle. It is to be used when the visibility conditions require it (twilight, darkness, tunnel sections).

SBB Re 460 with headlights.

In Switzerland the Zugspitze is marked with a three-light signal. Working locomotives also show a white light in the train set at the bottom right ( only the last one on multiple control locomotives).

At night, shunting locomotives show two white lights below on both sides, which are dimmed with lenses to reduce the glare effect, and an illuminated white V above on the side defined as the front.