The title of this article is ambiguous. For the Japanese rock garden (zen garden) see Kare-san-sui . For decorative stone surfaces, see gravel garden . For the gastronomy critic, see Jeffrey Steingarten .

As a rock garden refers to a garden , which, with intensive use of stones and gravel plants home to the mountain flora or drought-resistant plants. The stones form the substrate for the adapted vegetation.

Gravel gardens, in which stones themselves are the essential design element and, if at all, only a few, artificially designed plants occur, are not rock gardens in this sense. 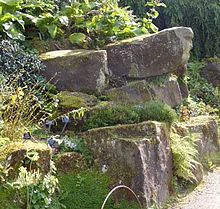 Historic Wisley rock garden, laid out by James Pulham in 1910, detail of a sandstone formation

Rock gardens are characterized by good drainage and the dominance of large stones and stone or gravel gravel. An ideal rock garden should be on a gentle slope, preferably facing south or south-west. It offers good growth conditions for rock garden and alpine plants . Plants that thrive particularly well here are known as rock garden perennials , while alpine perennials usually have such high location requirements that they are reserved for botanical gardens in the lowlands .

Special forms of the rock garden are the rubble garden or the gravel bed , in which mainly plants grow that prefer stony soil to the earth (so-called petrophilic plants ). The Alpinum is a special form of rock garden that contains high mountain plants. It consists mostly of stones. Good drainage must be ensured in the Alpinum.

Rock garden laid out between 1954 and 1958 in the Botanical Gardens of Cambridge University . The planting is divided into continents

A rock garden was laid out in the Chelsea Physic Garden in London as early as 1773. For this purpose, stones from demolition work in the Tower of London were purchased. This rock garden is the oldest rock garden still used as such in Europe and is now a listed building. Joseph Paxton built a rock garden in Chatsworth in the Peak District of Derbyshire for the Duke of Denvonshire , which the garden designer Dan Pearson partially recreated at the Chelsea Flower Show in 2015 and won a gold medal with it. Rock gardens were particularly popular in England in the late 19th century. The plant collector Frank Kingdon-Ward set up several rock gardens. 1890–1930 William Herbert St Quintin (1851–1930) laid out an innovative rock garden in his country estate Scampston Hall in Yorkshire. That is still preserved The author and plant collector Reginald Farrer , author of the influential book My Rock Garden, is considered the father of the English rock garden (1907) and The English Rock Garden (1919, written 1913) in two volumes. As early as 1894 he had set up a rock garden on the Ingleborough estate that belonged to his father. In Wisley , James Pulham and Sons created a rock garden in 1910, in which the stones were arranged as they had been in the quarry. A railway was built to transport the rocks. The garden is still preserved. The lawyer Frank Crisp created a 6 m high replica of the Matterhorn in his Friar Park garden near Henley-on-Thames with an original stone at the top with lakes and electrically illuminated grottos. The reaction of the horticultural establishment, however, was sharply negative. Themed rock gardens were popular at the time. In 1887 the engineer Joseph Fox Sharp designed a rock garden for the East Park of Kingston upon Hull , which replicated the Khyber Pass in artificial stone . It was expanded in 1904. In 1900 he also laid out a columbarium in the form of a sunken rock garden in Hendon Road cemetery in Hull, where he was buried free of charge in 1902 in recognition of his services.

Rock gardens were also frequently exhibited at the Chelsea Flower Show and won prizes, for example James Wood from Boston Spa was awarded for the Yorkshire Rock Garden in 1913 . In 1937 the landscape designer Sylvia Crowe (1901–1997), who is better known for her role in the design of British garden cities in the style of classical modernism, and the Cutbush Nurseries won a gold medal for a rock garden with a pond and waterfall.

With the increasing popularity of rock gardens in the 20th century, a number of new plants moved into the gardens. These include, for example, the common pasque flower , which was very rarely found in gardens towards the end of the 19th century and which today is a common choice in perennial nurseries and garden centers in many varieties and colors.

Typical plants for a rock garden include a .: