The rose-colored Catharanthe is an evergreen, perennial herbaceous plant to subshrub that reaches heights of growth of up to 80 centimeters. The opposite leaves are simple, ovate and have entire margins.

The individual, hermaphrodite, five-fold flowers in the leaf axils have a diameter of 3 to 5 centimeters. The five sepals are fused. The five petals that have grown together to form a tube vary in color from white to pink to purple. There is only one circle with five fertile stamens ; they are fused with the uppermost area of ​​the corolla tube. A two-seeded collective follicle is formed.

The pink Catharanthe originally comes from Madagascar , but is now widespread in the tropics. 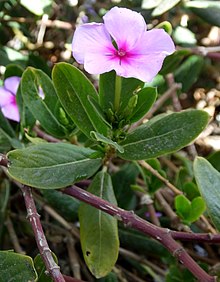 The rose-colored catharanthe is often cultivated and has also acquired medicinal importance. Over 70 alkaloids have been discovered in this species , which have a biological effect and are of medical interest. These are known as vinca alkaloids . The main alkaloid in Catharanthus roseus is vindoline with a concentration of up to 0.5% in the root. However, vinblastine with a share of 0.005% and vincristine with 0.001% are more important. These two alkaloids are used as cytostatics in chemotherapy, particularly against the cancers Hodgkin lymphoma and prolymphocyte leukemia .

The scientific investigation of the Pink Catharanthe began during the Second World War . Since the plant was used in Filipino folk medicine as an appetite suppressant, it was wanted to scientifically investigate its suitability for this. In 1952, however, Robert Laing Noble made the discovery in rats that the active ingredients of the Madagascar periwinkle caused a strong reduction in white blood cells in the blood and thus weakened the immune system. He concluded that these agents might be useful in the treatment of leukemia . This disease is characterized by a massive and uncontrollable increase in white blood cells. Two effective alkaloids could ultimately be isolated, which came on the market as the drugs under the trade names Velban (vinblastine) and Oncovin (vincristine). The vinca alkaloids are important in the treatment of lymphoma , leukemia, breast cancer and lung cancer .

One can differentiate between the following varieties:

In Madagascar , a herbal extract (Teinture mère) is freely available in stores under the name PERVENCHE.