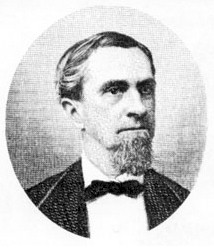 George Davis (born March 1, 1820 in New Hanover County , North Carolina , † February 23, 1896 in Wilmington , North Carolina) was an American politician and last Minister of Justice of the Confederate States of America . His family had lived in the Cape Fear District for more than a century .

Davis was the son of Thomas Frederick Davis and his wife Sarah Isabella (née Eagles). He graduated from the University of North Carolina as the first of his senior year in 1838 and opened a law firm in Wilmington two years later, where he soon earned a considerable reputation as a lawyer. From his marriage to Mary A. Polk on November 17, 1842, there was a son. After her death, he married Monimia Fairfax on May 9, 1866. His brother was a bishop of the North Carolina Episcopal Church .

Before the war, Davis was a staunch Whig in a Democratic- sympathetic group and refused to accept any office, even though he could have been nominated for gubernatorial election in 1848. At first he was against secession. That is why he was one of the delegates at the unsuccessful peace conference in Washington in early 1861. But on March 2, 1861, he pushed for secession and helped unite the Cape Fear District behind the war effort.

As a member of the Provisional Confederate Congress in 1861, he supported measures to protect the property shares. He also served on the CS Senate for North Carolina from 1862 to 1864 , where he chaired the Claims Committee, and also served on the Construction, Finance, Naval Affairs, and Conferences committees. Because he became a Democrat and a supporter of the secession, he failed in the re-election for the CS Congress against William Alexander Graham , a unionist Whig. The other former Whigs in the NC delegation to Congress called him a "Camp follower of the precipitators", one of those who helped cause the war. However, in fairness it has to be said that he was one of the most determined Confederate nationalists in Florida. Most of the bills he presented aimed at creating the largest and most effective army possible . With the exception of his extreme conservatism in financial matters, he was supported by the Confederate central government. In fact, he was one of only four CS Senators willing to allow a Supreme Court to appeal over the jurisdiction of the state courts.

President Jefferson Davis , who had a characteristic compulsion to reward a loyal, lame duck , made him attorney general on January 4, 1864. He did well as a minister, although most of the time he served as an advisor to the president and the other cabinet members. He seldom wrote reports in which he favored the claims of the states, and also became an uncompromising southern nationalist. Again and again he took sides on the side of the President against Congress. He resigned on April 27, 1865 from his office.

He left the CS president on his escape in Charlotte . He had not the slightest doubt that Union troops were trying to arrest him. So he left North Carolina. On June 3, 1865, he arrived at his cousin's plantation in north central Florida. From there he went to Gainesville and Ocala in Florida. He wandered through Sumter County for almost three months to reach the latter city, which was very far on the edge of civilization. When he heard that a boat to Nassau , Bahamas was leaving the port city of New Smyrna , he rushed there and hired that ship to pay for his passage with work. But that one was too small and not seaworthy enough to dare to cross to the Bahamas because of the stormy Atlantic. Instead, the ship sailed with him on October 18, 1865, down the coast to Key West . There the former Minister of Justice could have arranged a ship passage abroad. But when he learned that some CS cabinet members who had been interned had already been released, he too decided to surrender.

While he was waiting for a chance to sail north again, he was recognized and arrested. although he did not know what his future fate would be, he was relieved by the fact that he had now left the life of a homeless wanderer and refugee behind him. For reasons that he only knew "God and the Republican Party ", he was taken prisoner to New York City at Fort Lafayette , although most of the other members of the CS cabinet had already been released. But he was only released from prison on January 1, 1866.

Davis returned to his legal practice in Wilmington after taking his oath of allegiance to the Union, where he served as legal advisor with the Atlantic Coast Line Railroad . He avoided holding public office, but continued his work as a successful lawyer. He also gave lectures on the extensive Confederate war effort. In 1878 he declined the appointment of President of the Supreme Court of North Carolina for financial reasons. He died on February 23, 1896 in Wilmington and was buried there in Oak Dale Cemetery .

Senators from the Confederate States of America