This article is about watermarks in papermaking. For the astrological signs of the zodiac see Astrology # Zodiac Signs . 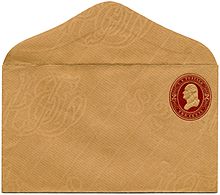 Watermarks are figurative marks introduced into paper through different paper thicknesses, recognizable by means of light transmission, and were originally used to identify the producing paper mill . Among other things, they are used as a security feature in banknotes and postage stamps as well as in personal documents . Since watermarks require a certain procedure in order to be perceptible (hold paper up to the light), imperceptible markings in digital content, which can also only be detected with a given method, are referred to as digital watermarks .

Watermark on the screen

10 euro banknote: The area that appears white on both sides with incident light (top left) reveals the watermarks with transmitted light (bottom left). The banknote shows a so-called “light mark” made of sheet metal and wire for the value and a “shadow watermark” for the authenticity mark

It has been proven that since 1282 in Bologna , Italy , the paper mills marked their goods by attaching a thick wire in the form of a letter or a symbol to the wire mesh of the ladle sieve . The first multilayer, 3D watermark was produced around 1800 . The introduction of the "dandy roll" as a dandy roll in 1826 by John Marshall revolutionized the watermark process and made it easier for producers. This figure leaves an impression in the paper; the fiber layer is thinner there, and when the light shines through, the watermark becomes visible as a more transparent image. Conversely, by partially deepening the sieve, it was possible to achieve an enrichment of the substance, which then got a more cloudy appearance. By cleverly combining deepening and heightening, even semitones can be simulated. This complex process is still used today for watermarks in banknotes . In the early days of European paper production, watermarks were the origin and trade marks of the paper mills.

Since the screens for paper production were worn out after around two years, the recording of datable watermarks with slight deviations that resulted from the manual production made it possible to date the paper. Because paper was usually not stored for long due to its high price, it is a comparatively precise instrument for dating the documents and graphics that have been handed down on paper . This is the working field of filigranology (watermarking), a historical auxiliary science that uses watermarks to research the age and origin of documents. For this purpose, extensive historical watermark collections have been created since the beginning of the 20th century. The first extensive work is Charles-Moïse Briquet's dictionnaire des filigranes , followed by the as yet incompletely printed collection of Gerhard Piccards in the Baden-Württemberg State Archives . Other large collections of watermarks can be found in the German Museum of Books and Writing in the German National Library in Leipzig and in the Düren Paper Museum .

The above-mentioned and a growing number of other watermark cards are now partially digitized . Particular attention is drawn to the following collections:

The digitization of further collections is also increasingly closing the gap in the mapping of the papers used in Eastern Europe .

A distinction is made between real, semi-real and fake watermarks. 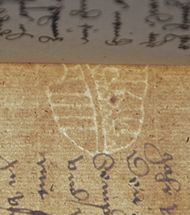 The accumulation watermark is caused by a disturbed deposition of the fibers during the formation process (transition of the fibers from swimming to lying). Depending on the shape of the wire and the length of the fiber, the accumulation watermark can be sharper or more blurred. The typical accumulation of watermarks on the round wire can easily be recognized by the fact that part of the fibers washed under the wire is torn off when the wire is drained and the edge is therefore always somewhat blurred. Trapezoidal wires or rectangular wires that lie flat on the sieve show a razor-sharp image (short pulp ). A distinction is made between two types of attachment watermarks:

The displacement watermark is created on the dandy section and is characterized by the fact that the fiber is displaced at the moment of formation by a dandy wire acting from above. The resulting watermark is characterized by the fact that it is always somewhat blurred (due to the wire shape used and the elasticity of the fleece) and is often provided with slight crushed edges. As a result of the inlet pressure, stock water penetrates through the sieve into the interior of the dandy roll. The flow is oriented in such a way that fibers floating freely in the suspension reach the tissue and are deflocculated there. The fine and fillers can then flow slightly and thus form a very fine, even surface.

In order to create real shadow watermarks , areas are now heated and pressed in during the production of the dandy sieve. Paper fibers collect in these recesses and a partial thickening takes place. Light watermarks are created by raised areas on the screen roller. This is done by soldering stainless wires, called electrical wires, to the top of the wire mesh. These displace the moist paper fibers and thus lead to a lower fiber concentration.

In the attachment process, cellulose can also be marked that can no longer be marked cleanly using the displacement process (long fibers). The following applies to both forms of watermark: The selected wire thickness depends on the later grammage and the thickness of the desired character. Wires of approx. 0.4 to 1.2 mm are suitable for hand paper making with a basis weight in the range from 40 to 300 g / m 2 .

Semi-real watermarks (for example the Molette watermarks ) are created by pressing them into the much drier paper web after it has left the wire section (usually in or after the first press). Most of them can be removed again afterwards through the partial action of caustic soda or water. In contrast to the real watermark, here the paper fiber web is primarily embossed and the fiber structure is not significantly changed. There is no significant reduction or increase in the thickness of the fiber pulp. Molette watermarks are usually made with hard rubber rings attached to the Molette (similar to stamps or letterpress types). Typical applications for Molette characters are lettering running along the edge parallel to the direction of the paper. Molette marks are more rarely produced as passport watermarks . The use of ornaments in the Molette is limited to simple line shapes. Flat or shadow watermarks cannot be created in this way.

The second form of semi-real watermark is the calender watermark . These are embossed into the completely dry paper web during calendering (smoothing through a combination of friction and pressure in the roller mill [= calender], historically also 'calendar' or 'calendar'). The paper is compressed hard. The calender watermark can be removed from the paper by swelling with water.

Fake watermarks (chemical watermarks) are not watermarks in the actual sense, as they are not created during paper production (i.e. not by water). Usually they are printed on afterwards. Very often transparent material (e.g. glycerine , fat dye or sulfuric acid paste →  mercerization ) is printed here, which is supposed to simulate a real watermark by adding color pigments. Subsequent embossing in the paper (similar to calendering) corresponds to that of a fake watermark.

A modern form of forging watermarks for shadow watermarks (attachment watermarks) that are difficult to copy consists of sheet production from two sheets of half their final thickness. One of the sheets is printed with the motif before gluing (later lying on the inside), which then appears like a shadow watermark when looking through it. Such sheets are easy with the firing sample or wicking check (see box - / paperboard production).

Fake watermarks can easily be recognized by the lack of thinning / thickening of the paper or by the recognizable color application and can be removed from the paper without residue using chemical reagents (e.g. alcohols).

In addition, nowadays watermarks based on ultraviolet radiation (UV) are increasingly used as security features for papers that are worth protecting. UV watermarks are brightly visible in backlight and appear fluorescent under black light . To increase the security level, these UV watermarks can be used in coated and colored papers.

Digital watermarks are media files introduced information . The main goal here is usually (as with a traditional watermark) that the actual information and that which makes up the watermark can no longer be separated from one another. There is a separate procedure for each type of media (images, audio, video) that is adapted to the respective coding and data format . The techniques used are closely related to steganography .