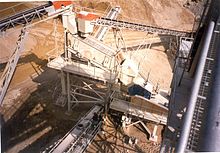 Sieving machine in a quarry near Belgrade (Serbia)

A sieving machine is a machine for sieving , i.e. the separation (separation) of solid mixtures according to grain sizes (from approx. 0.1 mm). The generation and determination of grain size and grain distribution in the case of disperse solids is very important in many areas. The first to study this scientifically was Georgius Agricola . As a doctor and universal scientist, he wrote the twelve books of metallurgy (published in 1556). In these, he scientifically describes for the first time sieving and various sieving machines alongside other apparatuses used in mineral processing technology. He died a year before the publication of his works, which are still valid today.

The following product properties depend on the particle size distribution (selection):

Sieving machines can be divided into three fundamentally different types:

The applications of the machines usually result from the types mentioned and their combination.

Vibrating screening machines differ fundamentally in their drive systems and the function that depends on them.

This type of screening machine is also driven by a (partly also two) central main shaft, which creates an oscillating circuit just like a cantilever drive. A further, synchronized wave distorts the generated oscillating circuit into an ellipse defined depending on the task at hand. Like the cantilever chairs, these machines can be used for the simplest to moderately difficult tasks. These machines have the great advantage that they can work without an incline or with a very slight incline.

The eccentric screening machines are driven by an eccentric drive shaft. The shaft is shifted with two roller bearings in the sieve box and with two bearings on the surrounding support frame. With this drive variant, the oscillating circuit is not generated by centrifugal force, but by the eccentric of the shaft. The consequence of this is that this drive system works independently of the load. To ensure that the system of forces is balanced, two rotating counterweights are used. The oscillating circuit is not reduced by fluctuating feed quantities or caking. This drive system can be used for medium to difficult operating conditions. In addition to almost all sorting tasks, these machines are very suitable for relieving the primary crusher.

Linear oscillators are driven, for example, by two opposing shafts with centrifugal weights. Other designs of the drives are exciter cells, two counter-rotating unbalance motors or electromagnetic drives. Linear oscillators work with a linear oscillation that is directed towards the machine's center of gravity. These machines can be used without inclination. As dewatering screen machines, they have the great advantage that they can also convey upwards and thus ensure optimal dewatering. These machines can be used for the simplest to moderately difficult tasks. The disadvantage is the lack of a horizontal component in an oscillating circuit. With difficult material to be screened, blockages often occur.

In eddy current screening machines , the material to be screened is transported by a screw feeder into a cylinder screen and swirled through the screen by a rotor with vortex bars. During this process, the fine material is screened out and the coarse material (impurities) is automatically separated. 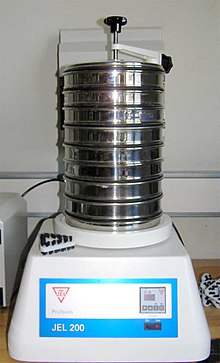 In the laboratory area, screening machines can be divided into four types:

Here, vertical throwing movements are superimposed with slight rotating movements. This means that the sample is distributed over the entire surface of the sieve bottom and the particles are simultaneously accelerated in the vertical direction (thrown up). They can rotate freely in the air and are compared with the meshes of the sieve fabric when they fall back onto the sieve. If the particles are smaller than these, they pass the sieve, if they are larger, they are thrown up again. The turning movement ensures that the next time they hit the screen mesh, they have a different orientation and so they might get through a mesh opening.

Modern screening machines work with an electromagnetic drive in which a spring-mass system is set in motion and the resulting vibrations are transmitted to the screening tower. The oscillation amplitude and sieving time should be digitally adjustable and constantly monitored by an integrated control unit - this is the only way to reproduce and precisely reproduce sieving results (important prerequisites for a meaningful analysis). The flexible setting of parameters such as amplitude and sieving time allows the degree of sieving to be optimized for each sample individually. Therefore, this type of sieving is the most common in the laboratory.

With this type of sieving, the sieve tower performs a horizontal circular motion in one plane. As a result, the particles largely retain their orientation on the screen mesh. Flat sieve machines are preferably used for needle-like, platelet-shaped, elongated or fibrous material to be screened (particle shape deviating significantly from a spherical geometry), in which throwing up the sample material is not necessarily an advantage. Since test sieves with a large diameter of up to 400 mm can be used with this method, it is also suitable for large batches such as occur, for example, in the grain analysis of building materials and aggregates .

Tumbler screening machines are built as round flat screens. With this type of construction, the screen executes a circular movement like in planar screening machines , which is also superimposed by a vertical movement. The material to be sieved is placed in the middle, distributed evenly from the inside to the outside over the sieve surface and the overflow is drawn off at the edge. The typical sieving for tumbler is based on the circular and tumbling, three-dimensional movement of the sieve. Tumbler screening machines are available with crank or unbalance drives.

A special type is the multi-deck screening machine , which can fractionate several grain sizes at the same time. 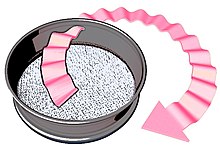 A horizontal circling movement is superimposed with a vertical movement, which is triggered by a knocking pulse. These movement processes, which are characteristic of manual sieving, achieve a higher sieving rate for heavier particles (e.g. abrasives) than can be achieved when sieving with throwing sieve machines.

The device is connected to a standard vacuum cleaner, in which the sieve passage is later held back. A small amount of the product to be analyzed is weighed out on an analysis sieve, which is then sealed airtight with a lid. After setting the relatively short sieving time of 3 to 5 minutes and pressing the start button, the sieving process begins. The product is shifted by the rotating nozzle wing and at the same time the screen mesh is blown clean from below. The vacuum generated by the vacuum cleaner pulls the fine product through the sieve and is separated from the air in the vacuum cleaner bag. With the built-in three-way valve, the desired negative pressure can always be corrected precisely and quickly. Then the sieve residue is weighed out.

This guarantees a high, reproducible sieving accuracy even with difficult to sieve products as well as short sieving times.

Screen meshes are produced in various mesh sizes (from 20 µm) and various diameters. Sieving machines are available in different designs, depending on the demands placed on the products. Design data are generally the required screening capacity, the desired purity, the required output, the feed material with its bulk density and the available space. The optimal screening machine can be selected from this data.