The basket willow ( Salix viminalis ), also Hemp Willow called, is a plant from the genus of willow ( Salix ) within the family of the pasture plants (Salicaceae). It is cultivated because the extremely long rods can be used to make wickerwork such as baskets ; therefore it is counted among the wicker . In many cases, pollarded willows are incorrectly referred to as osier because they were regularly beheaded and the regrown shoots were then used for basket weaving. Typical pollarded willows are mostly broken willows or white willows or their hybrids, which get the typical pollarded willow growth form through regular cutting ( snowing ). 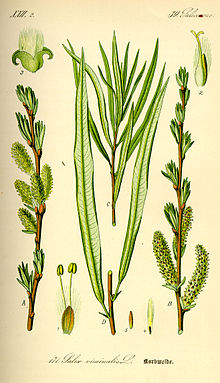 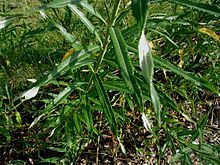 The underside of the long leaves is gray to white

The basket willow grows as a deciduous shrub (only rarely as a tree ) with particularly long branches (branches, twigs) and reaches heights of 3 to 8, in extreme cases 10 meters. The bark of young twigs is initially dense gray hair, but later bare.

The alternate leaves arranged on the branches are divided into a petiole and a leaf blade. The petiole is 3 to 12 millimeters long. The simple leaf blade is 10 to 25 centimeters long and 0.6 to 1.5 centimeters wide, narrowly lanceolate with a rounded blade base. The entire margin of the sheet is slightly rolled up. The underside of the leaf is hairy silky silver-gray, the upper side dark green and glabrous. The stipules are narrowly lanceolate.

The basket willow is dioeciously separated sex ( diocesan ). The inflorescences appear in March and April, just before the leaves shoot. The kittens are cylindrical with a length of about 2.5 centimeters.

The basket willow is forage for the caterpillars of 21 butterfly species. 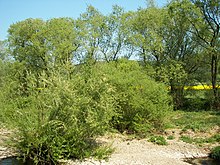 Wicker bushes on the Lahn

The basket willow is widespread in northern continental Europe from the Pyrenees to the Urals, as well as in northern Asia . Originally absent from the British Isles and Scandinavia , people in England planted it to make baskets. It rises to an altitude of 800 meters and is mainly found in the lowlands .

The osier thrives best on deep, heavy, base- and nutrient-rich, mostly calcareous soils in locations close to water. There it forms osier bushes, often together with almond willows ( Salix triandra ), which are known as Salicetum viminalis or Salicetum triandro-viminalis . These bushes represent a habitat that is very much dominated by the willow species and that counts as a separate plant community . They belong to the Salicion albae association, i.e. the pasture meadows in lower elevations and can be found on the banks of rivers and ditches . The almond willow bushes are located there between the river bed , which is inaccessible to wood plants, and the actual white willow forest ( Salicetum albae ).

In the wild, previously planted willow stocks can grow wild.

The coat of arms of Geesthacht shows a basket willow.

The first publication of Salix viminalis was in 1753 by Carl von Linné .

There are many hybrids of Salix viminalis with other species (selection): 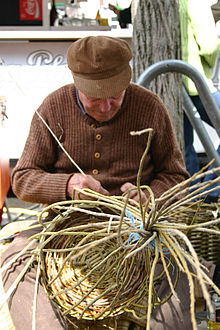 A basket weaver at work

Basket willows are relatively easy to multiply using cuttings. It is cut for use as pollarded willows and, in many places, has a character that defines the cultural landscape as a so-called willow hedge. Planting takes place primarily on areas that cannot be used for other crops due to the high risk of flooding, for example along floodplains , streams and moats. The rods are usually harvested every two to three years after the leaves have fallen in autumn. However, due to the increasing production of plastic , the use of wicker has declined sharply in the last few decades, so that today the harvest no longer takes place in many regions and the pollarded willows are only pruned as a landscape conservation measure. The traditional center of German basketry is in Mainfranken in the town of Lichtenfels , where the state technical college for basketry is also to be found.

The main use of the wicker is the use of the extremely long rods for the production of wicker goods such as baskets or wicker furniture. The willow rods are very flexible and at the same time strong, which makes them a resilient material. The rods are used unpeeled for coarser work and peeled (debarked) for finer work. Baskets made from unpeeled rods are mainly used in agriculture as transport baskets for fruit, potatoes, vegetables or grass and as bottle baskets in industry. Peeled wicker baskets can be found as fine household baskets, shopping baskets and laundry chests, furniture, beach chairs and, in the past, prams and dolls' prams are also made from these rods. In order to produce particularly fine woven objects such as sewing or confectionery baskets, the rods are also split into two to four rails and then processed (whipped work).

Perennial rods are processed into so-called ribbon sticks, which are split and used as barrel hoops and braided rails. The job of the tape breaker who carries out this work has almost died out due to the low demand.

Twigs cut in early spring take root after several days. This can be used to build “living fences” that can become very tight over the years if the side shoots are intertwined. The wicker is also used to fortify embankments . Due to its shrubby growth, the basket willow as a supplier of wood for other purposes has only a very minor or no importance compared to the tree forms such as the silver willow ( Salix alba ). The wood of the wicker can, however, be used as firewood .