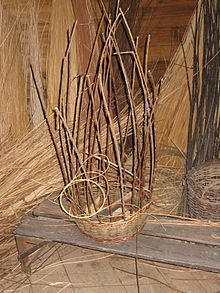 A basket (in Swiss dialect : Zaine or Zeine ) is a woven container , usually made of wooden, flexible material, for transporting and storing loads or material. Basketry is the collective term for goods through the basket weaving are produced.

Baskets or wickerwork are wickerwork made from rods, twigs , split wood, tree bark, rattan , bamboo , esparto ( esparto and half grass ), reeds or palm leaf veins . The most common material for basket weaving willow branches are specially planted for this purpose osier .

Containers made of plastic or wire mesh are also referred to as baskets if they are reminiscent of wickerwork in terms of shape or function. 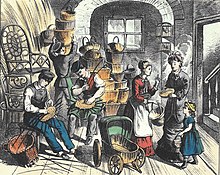 The basket maker (from What do you want to become , around 1880)

Annual willow saplings that are peeled or unpeeled (but only for large baskets) are cut annually at a height of 1 to 1.5 m.

If you want to peel it, you pull it in the fresh state through elastic wooden or iron tongs (clamp) and then loosen the cracked bark. After peeling, the rods are dried in the air and in the sun as quickly as possible so that they retain their white color. By soaking them in water they regain their original flexibility and are then ready for braiding. At least in the main time of the basket articles, the material was in the trade in many qualities and price differences. Washed or unwashed pipe can be used, the washed one gives the product a more pleasing appearance.

For very fine work you split the rods into three or four rails. This is done with the ripper (also known as Klöber), a somewhat cone-shaped turned piece of hard wood, which is cut out from the middle to the upper thin end in such a way that it forms three or four wedge-shaped cutting edges, like rays from a center point. The tail is cut at the thick end with the carver, the ripper is placed on the tail in such a way that its wedges enter the cuts, and pushed on to the other end. To transform the three-sided split pieces into smooth rails, you pull them repeatedly through the basket-making plane and then through the narrower to trim the side edges and make all rails the same width.

Different braiding techniques are used worldwide depending on the region. Mainly in rural areas of Europe are swinging (also called frame baskets) spread. For this type of basket, a frame is built from willow, which is then woven out.

In contrast to this, with barbed basket weaving, the bottom of the basket is woven first and then the side walls. This is done on a simple frame, the machine , on which the floor is attached. The ground is paved . The pegs form the framework for the basket wall, they are braided out and finally made into the edge of the basket. 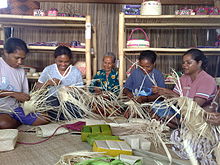 Remains of a basket made using the bead technique from around 10,000 BC. BC found archaeologists in the Middle East. 5000 year old grave goods in basket shapes were found in a cave in southern Spain in 1857. Wicker baskets were found in the Neolithic pile dwelling settlements in Auvernier on Lake Neuchâtel . The Celts , who lived in Central Europe, also mastered this ancient craft.

The dying basketry production in Germany was based in Berlin, Hamburg, Leipzig, Dresden, the Rhön, Bamberg and Schmalkalden . They provided particularly fine wickerwork. The headquarters of the wicker industry, which works for export, was in the Upper Main, near Coburg, near Lichtenfels am Main and in the Fichtelgebirge. In the Erzgebirge (Lauter near Schwarzenberg), chip baskets in particular were made. In Lichtenfels there is still a college for basket weaving today . The modern job title of basket weavers is wickerwork designer

In many cases, the blind were instructed in basketry in order to make their contribution to livelihood in special homes. 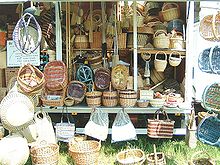 Basketry from a hawker

Basketry includes the most varied forms of baskets. There is also furniture, strollers, candlesticks, carpet knockers , picture frames and numerous haberdashery goods that are made using the wickerwork technique. Beehives were baskets made using the bead technique.

A basket used for fishing is called a trap .

The majority of the transport containers under the gas and hot air balloons are still today made of woven wicker. On the one hand, this makes them very light and, on the other hand, they deform on landing due to the elasticity and do not break in two. So you can start again. Balloon baskets can hold up to 16 people.

The allegedly largest handmade basket vase in the world is in Almerswind in Thuringia.