Overview of veins and venous sinuses of the head 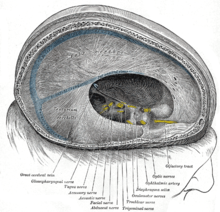 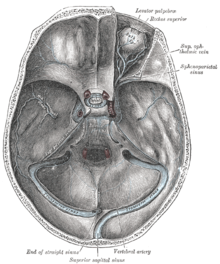 The sinus durae matris are venous blood conductors of the brain . They are also mistakenly called sinus veins . In contrast to veins , they lack the covering of muscles ( tunica media ) and the venous valves. They consist of an endothelialized duplication of the hard meninges ( dura mater ) and are therefore rigid-walled. As a result, they lack the ability to transport blood in a certain direction. The direction of blood flow depends on the position of the head. They collect the deoxygenated blood from the veins of the brain, the meninges , the skull bones and theEyes .

The superior sagittal sinus runs in an imaginary midline under the roof of the skull along the so-called cerebral sickle ( falx cerebri ). The inferior sagittal sinus runs in the free edge of the falx above the bar and flows together with the great cerebral vein into the rectus sinus . This runs straight back to the confluens sinuum , into which the superior sagittal sinus coming from above joins. The occipital sinus is also connected here . The paired sinus transversi carry the blood from the confluens to the posterior base of the skull, where they wind in an S-shape and from there are called sinus sigmoidei . Finally they flow into the deep neck veins . The cavernous sinus is a spongy mesh that lies on the sphenoid bone and is connected to the rest of the venous sinus system by a superior and inferior petrosal sinus on each side.

The sinuses can bleed profusely in skull injuries. Clots in them are called sinus thrombosis .