The exact frequency of sinus thrombosis is unknown. It is estimated that 3–5 new cases occur per 1 million population annually. Women are affected more often than men in a ratio of 3: 1. The mean age of onset is 30–40 years.

Cerebral venous sinus thrombosis are occasionally purulent infections in the facial area , Nasennebenhöhlenvereiterung , mastoiditis or meningitis caused. In this case one speaks of a septic sinus thrombosis. Diseases with increased blood clotting ( polycythemia , antithrombin deficiency and others) can play a role. Pregnant women are at increased risk. Some medications like contraceptives and corticosteroids are also disadvantageous.

The venous blood conductors of the brain are thin-walled and have few smooth muscles, no venous valves and no vasomotor innervation. In addition to the sinuses, there is a deep venous system. In most cases, a sinus thrombosis affects multiple sinuses or sinuses and deep cerebral veins at the same time. In contrast to arterial occlusions, which occur suddenly, venous thrombi form gradually due to a disturbed balance between prothrombotic and thrombolytic processes taking place simultaneously. The blocked outflow of blood leads to an increase in pressure and can lead to bleeding into the parenchyma or ventricles. The superior sagittal sinus and the lateral (lateral) sinuses are most commonly affected. 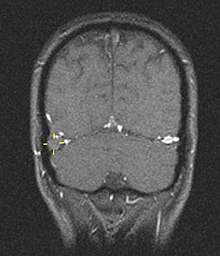 Sinus thrombosis on the MR image

The symptoms of a sinus thrombosis are ambiguous: headaches, epileptic seizures and changes in character and, in advanced stages, paralysis, visual disturbances and a clouding of consciousness up to unconsciousness can also be observed in other diseases. If there is inflammatory involvement of the cavernous sinus (such as sinusitis , meningitis or inflammation in the eye or face area that initially appears banal), there is usually an additional high fever .

The clinical diagnosis of sinus thrombosis is difficult because there are no conclusive clinical signs and symptoms can also point to other diseases such as an abscess , encephalitis or malignancy . The clinical suspicion of a thrombosis can be corroborated by a determination of the D-dimer level in the blood serum, but not proven. If the transverse sinus is thrombosed, the Griesinger sign may appear.

Because of the diagnostic difficulties based on the clinic alone, cross-sectional imaging is recommended at an early stage if there is a suspicion. In computed tomography or magnetic resonance tomography , infarct zones and bleeding can be seen that do not correspond to the known arterial supply areas. In native computed tomography, the clot in the sinus can be displayed brightly even without contrast agent. With contrast media, both in computed tomography and in magnetic resonance tomography, the clots can usually be seen directly as a recess in the otherwise contrasted sinus. They have to be distinguished from recesses in the sinuses that are formed by Pacchionic granulations . The common anatomical variants such. B. with asymmetrical or unilateral sinus transversus must be taken into account. In exceptional cases, angiography can only be used as a further diagnostic method if the other methods mentioned above are not available if there is justified suspicion of a sinus thrombosis.

Heparin in high doses, later orally applicable anticoagulants such as phenprocoumon or warfarin ; Cranial pressure prevention, tranquilizers (sedatives) and anticonvulsants for seizures. The dissolution (thrombolysis) or surgical removal of the thrombi is only possible in rare cases.