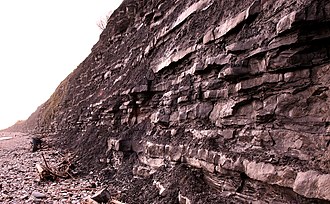 Limestone banks of the Blue Lias Formation (Lower Jurassic) on the cliffs at Lyme Regis , Dorset, England, clearly wafting out between dark claystones

In geology, bank generally refers to a rock layer with thicknesses in the centimeter to meter range, which differs in its individual characteristics ( color , texture , material) from the layers directly overlying and underlying it. The term is mainly used when such a layer clearly emerges from the rock structure, because those overlying and underlying layers in the outcrop form a layered joint accentuated by weathering . A larger body of rock, which is mainly made up of such banks, is called banked . The structure of a rock from banks or its peculiarities are called banking . Banks are mainly found in sedimentary rocks (including loose sediments) and pyroclastics , less often in lava rocks .

In the geological sense, the bank should not be confused with the gravel or sand bank , which denotes sediment washed up on the surface of the terrain or at the bottom of bodies of water.