Julius Schrader in his studio, painting " Pope Gregory VII and Count Cencius". Illustrated by Wilhelm Camphausen in The Shadows of the Düsseldorf Painters , 1845 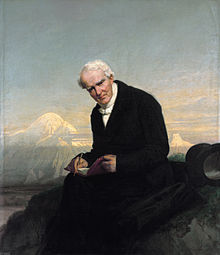 Julius Friedrich Anton Schrader (born June 16, 1815 in Berlin ; † February 16, 1900 in Groß-Lichterfelde ) was a German painter from the Düsseldorf School .

Julius Schrader attended the Berlin Academy from 1830 to 1832 . At the Düsseldorf Academy he continued his studies under Friedrich Wilhelm von Schadow from 1837 to 1844 . After graduating from the academy, he stayed in Düsseldorf and became known for his portraits and the history painting Poisoning attempt on Emperor Friedrich II .

From 1845 to 1847 study trips took him to Italy , namely to Rome as well as to Holland , Belgium , France and England . After his return to Berlin in 1848 he devoted himself mainly to history painting and was involved in the painting of the New Museum in the 1850s . From 1856 to 1892 Julius Schrader worked as a teacher at the Berlin Academy.

Julius Schrader died on February 16, 1900 in Groß-Lichterfelde near Berlin.