Leros ( Greek Λέρος ( f. Sg. )) Is a Greek island in the Aegean Sea . Together with Farmakonisi , Levitha and Kinaros and some other uninhabited islets, it forms the municipality of the same name (δήμος, Dimos ) within the South Aegean region . The 54.052 km² large and up to 321 m high island lies off the coast of Asia Minor and the Gulf of Güllük ( Turkish Güllük Körfezi ). Leros belongs to the southern Sporades archipelago .

About 8000 people live on Leros. The main town is Agia Marina, which merges seamlessly into Platanos. The place is crowned by the imposing fortress from the 14th century, which the Johanniter built.

The Carians , the Lelegs , the Phoenicians and the Cretans with their leader Rhadamanthys , brother of King Minos , are mentioned as early inhabitants . Later the Dorians settled the island of Leros. Herodotus reports in his works of a close political and spiritual exchange and of lively trade relations with the Ionians of Miletus . In the 5th century BC Leros experienced a spiritual heyday. It was the time of the poet Democritus and the historian Feredikes .

After the Persian Wars , Leros sided with the Athens League . Grave steles and coins from the time of Alexander the Great indicate the presence of the great general and his army. The writer Plutarch also emphasizes the crucial role of the position of Leros in shipping and refers to the captivity of Julius Caesar on the island of Farmakonisi (Pharmakousa) near Leros.

Magnificent Christian churches were built on the island during the Byzantine period. Constantine the Great included Leros in the Samos League. At this time the castle and the Church of Our Lady as well as the Lepid castle known today as Palaeokastro were built. This is located in a region where the remains of the Cyclopean Wall have been preserved to this day. On the island are valuable monuments from the Byzantine period such as the early Christian church in Partheni and the church of Hagia Barbara, which are built from structural elements excavated in the region. The spoils such as marble fragments, capitals, stone slabs and other materials come from the ancient city of Leros and the early Christian churches of John the Theologian, Our Lady Gourlomata and Our Lady of the Castle.

In Alinda, but also in other areas of the island, there were vaults built into the ground, the tholaria , which probably served as shelter for monks. In 1314 the island was taken by the Order of St. John of Rhodes. In 1523 the Turks raided the whole of the Aegean and reached this island. Despite the extremely difficult conditions during the Turkish rule, Leros was still able to maintain a kind of independence. So it was no coincidence that when the Greek Revolution broke out in 1821, the inhabitants of this island were among the pioneers.

After the Greek Revolution of 1821 against the Ottoman Empire , the London Protocol of February 3, 1830 decided to found the Kingdom of Greece as a completely independent and tribute-free state. Despite their active participation in the revolution, the Dodecanese Islands were returned to the Ottoman Empire in exchange for Euboea .

As a result of the Italo-Turkish War , the islands were occupied by Italian troops in April and May 1912 . The occupation of Leros took place on May 12, 1912. It was not until the Treaty of Lausanne of July 24, 1923 that the Dodecanese Islands became Italian property as the Italian Aegean Islands . The whole island was turned into an arsenal, fortress walls were built and military installations were built. This was intended to secure Leros as Italy's military base in the Mediterranean. Lakki with its natural harbor was expanded into a naval base on a large scale and therefore called "Malta of the Aegean".

In Lakki ( Italian Portolago) the city was rebuilt; old buildings were demolished to be replaced by new ones in an architecture unique in Europe and highly advanced for the period.

After Italy surrendered in World War II , Leros was occupied by British troops in September 1943.

The army troops were supported by strong air force units , including groups I and II of Stukageschwader  3, some of which took off twice a day from Rhodes and from the Megara airfield (west of Athens), which is 80 minutes away.

At the end of the Second World War, Greeks belonging to the army group liberated the island. After the unconditional surrender of the German Reich in 1945, the Dodecanese Islands came under British interim administration until March 31, 1947 . On March 7, 1948, they were finally integrated into the Greek state.

Leros has a sad tradition as a place of exile. The last time it was during the dictatorship from 1967 to 1974 was Gyaros, one of the two islands on which internment camps were set up. The Greek composer Mikis Theodorakis was one of the prisoners. From 1947, the children of communist partisans were re-educated here in so-called “children's villages” . The island was a leprosy station much earlier .

Since 1957 the largest psychiatric clinic in Greece has been established at Lakki . At times up to 2,700 mentally ill people from all over Greece were housed here. The inhumane conditions under which they were kept (partially chained naked) came into the focus of the international public in the 1980s. Since the psychiatric institution represented the largest economic factor on the island as an employer and for supplies, efforts to dissolve it met with strong resistance from the population. Under pressure and with the help of the European Community, qualified psychiatric treatment was introduced and the majority of the patients were de-hospitalized.

Leros has had a partnership with Aschheim in Bavaria since 2000 .

Leros has recently made headlines again for its camp for refugees .

The castle of Leros, also known as the castle of Our Lady, is located in a prominent position east of the city on the bare top of the hill Apitiki at about 300 m height. The castle was built in the Byzantine period on the ruins of the ancient fortress of Leros. Excavations brought ancient graves from the 7th century BC. To daylight. In the event of enemy attacks by robbers and pirates, the population withdrew here for protection. In quiet and peaceful times, people lived in the houses in front of the fortress. Around 180 old houses from that time are still abandoned and in need of renovation in this place. Inside the castle is the monastery of Our Lady "Kira" (mistress) from 1300 with remarkable frescoes. There is also a collection of icons, manuscripts, baptismal fonts and an epitaph that are of archaeological but also of Byzantine church interest. There are numerous stories and folk legends related to the icon of Our Lady.

Old and noteworthy churches on Leros are the Churches of Christ and the Cross in the region of Platanos. Of greater historical interest is the Church of St. Paraskevi, which was once the island's metropolis. 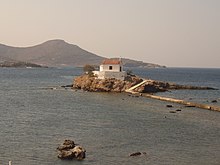 Close to the beach in the north is the church of St. Kioura or Matrona, which has fresco paintings and ancient icons. The church was built or rather thoroughly restored and newly "iconographed" by political prisoners during the dictatorship between 1967 and 1974. In the immediate vicinity of Kokkali is the chapel of St. Isidoros, which was built on a rock in the sea. The rock is only connected to the coast by a man-made cement path 50 m long. Next to the rock at the bottom of the sea you can see the ruins of an ancient temple. Following the coastal road to the south, shortly after the Gourna region, near Drimona, you reach the chapel of Our Lady Gourlomata from the 14th century, which is decorated with frescoes and built with elements of an ancient building.

One of the most beautiful chapels on the island is located near the settlement of Xerokambos. This picturesque chapel is consecrated to Our Lady Kavouradena (Kavouras, "crab") . It was literally built in the middle of the rocks on the coast. The choice of the location is not accidental, but is based on an old legend according to which a fisherman, looking for crabs there, found the icon of Our Lady in a crevice. The chapel can be reached via several steps in the middle of the rocks. 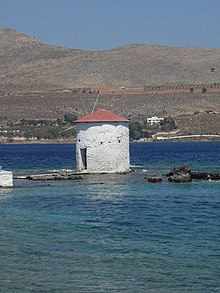 Old mill at the port entrance of Agia Marina

There are daily ferry connections to and from Piraeus via Amorgos and Patmos , which take around eight to eleven hours to cover the 171  nautical miles . There are also boat connections to Kalymnos , Kos and Rhodes . By means of the hydrofoil and the catamaran, Leros is connected to the islands of Patmos, Lipsi , Kos, Rhodes and Samos beyond the summer months .

The island also has Leros Airport in the north near the town of Partheni with a runway 1012 m long. Olympic Air flies to Leros from Athens, Rhodes , Astypalea and Kalymnos .