Astypalea ( Greek Αστυπάλαια [ astiˈpalɛa ] ( f. Sg. )) Is a 96.42 km² Greek island in the Southern Sporades in the Aegean Sea . The main island, together with about 45 uninhabited islands and rocky islands, forms a municipality (δήμος, Dimos ) within the South Aegean region . 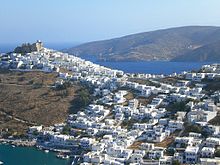 Astypalaea is divided into two parts. The eastern Mesa Nisi (Μέσα Νησί ‚Inner Island) and the western Exo Nisi (Έξω Νησί‚ Outer Island) are connected by an almost 5 km long land bridge, which at its narrowest point measures just over 100 m. Bounded by the two parts of the island and the land bridge, two large bays form, the northern bay and the southern bay of Astypalea (Βόρειος Κόλπος Αστυπάλαιας, Νότιος Κόλπος Αστυπάλαιας). The coastline of the island is divided by numerous other larger and smaller bays and is surrounded by several small rocky islands. The distance from Cape Armeno (Ακρωτήριο Άρμενο) in the west to Cape Poularis (Ακρωτήριο Πούλαρης) in the east is a little over 19 km.

View over Skala, the port of Chora

The larger part of the island Exo Nisi has an extension of 13.7 km from Cape Liani Pounda (Ακρωτήριο Λιανή Πούντα) in the northwest to Cape Echili (Ακρωτήριο Εχειλ Süd) in the southeast and about 8 km in west-east direction from Cape Armeno to the land bridge . The center of the island is drained by several streams, some of them all year round, depending on the rainfall. The Kakos Potamos (Κάκος Ποταμός) rises in the area of Messaria , flows north and flows into the bay Pachia Ammos (Όρμος Παχεία Άμμος). The Livadia stream (Ρέμα των Λιβαδιών) is stored in a reservoir. The estuary is in the east in the Livadi Bay (Όρμος Λιβάδι). In the southwest of Astypalea, west of the headwaters, are the highest peaks on the island. Several mountains reach heights of over 400 meters, the Vardia (Βάρδια, guard) is the highest on the island at 482 meters.

Mesa Nisi is the smaller part of the island. From Cape Flouda in the north to Cape Poularis in the southeast the distance is 11.2 km and from there to the west to the land bridge 6.3 km. Overall, Mesa Nisi is less mountainous. In the north, the Agios Thomas (Άγιος Θωμάς) reaches 210 m, the Kastellanos (Καστελλάνος) in the southeast reaches 366 meters.

The community has 1334 inhabitants who are spread over four towns

The community's numerous small and rocky islands are uninhabited.

Both the community logo and the slogan A butterfly in the middle of the Aegean ... (Μια πεταλούδα στη μέση του Αιγαίου ...) refer to the outline of the island, which resembles that of a butterfly.

At the Kylindra excavation site on the southwestern edge of the main town of Chora, the largest ancient children's cemetery with the bones of 2,400 babies and toddlers was uncovered. There is also the ancient Katselos cemetery for adults and older children on the neighboring hill.

In the 5th century BC Astypalea belonged to the Attic League . The ancient polis was on the site of today's Chora. In ancient times the island was known for its abundance of fish.

From 1207 (division of the Byzantine Empire after the Fourth Crusade ) the island belonged to the Venetian noble family of the Querini for 330 years, with an interruption at the end of the 13th century. After repeated looting by pirates who depopulated and deserted the island, the city was re-founded by settlers from Tinos at the beginning of the 15th century .

Chaireddin Barbarossa conquered Astypalea for the Ottoman Empire in 1537 . In 1658, Astypalea was the Venetian naval base during the War of Crete . The Italian name of the island was "Stropalia" or "Astropalia".

In 1821 the sailors from Astypalea took part in the Greek War of Liberation , but the island was rejoined to the Ottoman Empire in 1832 under self-administration . In 1912 it came under Italian rule and only in 1947 together with the Dodecanese became part of Greece.

View from the fort

A Venetian castle is located above Chora. It was built by the Querini in the 13th century and rebuilt after being destroyed by pirate attacks when it was founded in the early 15th century.

Outside the castle wall is the church "Maria Himmelspförtnerin" ( Greek Ευαγγελίστρια η Πορταήτισσα , Evangelistria i Portaitissa ) from the 18th century. It is considered one of the most beautiful churches in the Dodecanese.

At the village of Maltezana there are remains of a Roman bath with well-preserved mosaics. Countless votive chapels date from the Byzantine period .

Tourism has so far been underdeveloped on this remote island, which has only narrow pebble beaches. The main income of the islanders are the cheese industry (goat and sheep cheese), the cultivation of citrus fruits and fishing (including lobster).

Astypalea Airport, also known as "Astypalaia Island National Airport" or "Panaghia Airport" ( IATA : JTY , ICAO : LGPL ) is located in the middle between the two halves of the island in the village of Analipsis, approx. 12 km from Chora. The asphalt runway with an orientation of 15/33 is 989 m long and 30 m wide. The airport is located at an altitude of 50 m (165 ft) above sea level .

It is served by Sky Express with flights to Athens , Kalymnos , Kos , Leros and Rhodes .

In November 2020, the Greek government announced a joint venture with the Volkswagen Group , with which the island's entire transport system is to be made climate-neutral . In addition to various car sharing services, which will replace the hitherto meager bus network consisting of just two lines, and the conversion of the official vehicle fleet to electrically powered vehicles, a comprehensive charging network is to be installed. The entire energy requirement should be generated regeneratively .

There are currently around 500 cars and commercial vehicles as well as 1000 two-wheelers on the island, which are to be replaced as completely as possible by 1000 electric vehicles from VW over the next two years. The island's electricity needs will grow by around 15 percent as a result of the switch to electric vehicles; this additional demand is to be covered exclusively by solar and wind power. VW will supply the electric vehicles for the project at cost. Their purchase is also to be subsidized by the state. The plan is for the Greek state to fund the purchase of an e-car with a contribution of 12,000 euros per vehicle. The costs for Greece are given as 8 to 10 million euros.