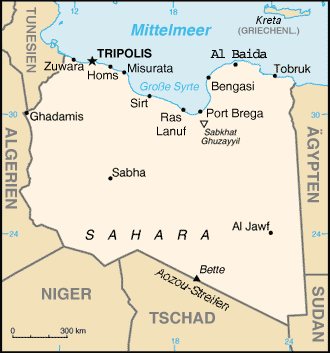 The Great Syrte extends between the headland of Cephalae (Ras Kasr Hamet) near Misurata in Tripolitania (west) and the headland of Boreum Ras Teyonas near Benghazi in Cyrenaica with the Barka plateau in the east and has a length of 439 kilometers, and a maximum width of 180 kilometers (indentation to the south). The area covers around 57,000 km².

The cities of Sirte , Ras Lanuf and Marsa el-Brega (al-Burayqah) are located on the Great Syrte . They are transshipment points for Libya's oil exports and are connected to the interior via pipelines .

The division of the empire of 395 , which divided the Roman Empire into western and eastern currents, divided the coast of the great Syrte between the two empires. During the Second World War there were two skirmishes between British and Italians in the Gulf of Syrte, the first and the second naval battle in the Gulf of Syrte . Citing its own interpretations of the Convention on the Law of the Sea , Libya declared a large part of the Great Syrte, namely the entire area south of the 32nd parallel (more precisely: 32 ° 30 'N; called by Libya's former head of state Muammar al-Gaddafi "line of death") to be its own Territorial waters . This expansion into waters that are regarded as international, which is not recognized by most of the non-Arab states of the world, has repeatedly led to military conflicts, even though there are no international shipping routes through the Syrte other than connections to and from Libya. The US 6th Fleet stationed in the Mediterranean repeatedly carried out maneuvers ( freedom of navigation exercises ) that were supposed to put Libya in its place. In 1981 and 1989 two Libyan fighter jets were shot down by US forces stationed in the Mediterranean . In 1986, during Operation Attain Document III / Prairie Fire in the Great Syrte, two Libyan warships were sunk by US forces .