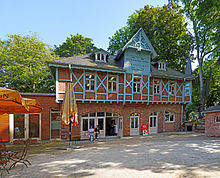 The Goldstein studio of Lebenshilfe e. V. Frankfurt am Main is an artist colony in a studio in Frankfurt-Sachsenhausen . The group consists of seventeen artists with handicaps such as autism , Down's syndrome or similar, as well as seven specialist supervisors with art or art education training and the initiator, co-founder and director Christiane Cuticchio. Cuticchio is a trained stage and costume designer.

In 2000 Christiane Cuticchio had the idea for this studio, which she was inspired to by the presentation of the works of the Swiss artist Adolf Wölfli (1864–1930) at documenta 5, among other things . To do this, she sought contact with the association Lebenshilfe e. V. Frankfurt am Main . Since she had no training to work with disabled people and artists, she did a two-year internship at various positions in the association while working for the Frankfurt Opera. Afterwards, an artist friend found studio space in a World War II bunker in Frankfurt-Goldstein . The district was named after the studio. With the support of the Peter Paul and Emy Wagner-Heinz Foundation , the artists were later able to move to their current location, the remise of a factory in Frankfurt-Sachsenhausen that was built in 1881 on behalf of Philip Peter Heinz.