The Blücher is a classic men's low shoe basic model with an open lacing, whereby the upper parts to be tied are sewn onto the upper side as attached ribbons. 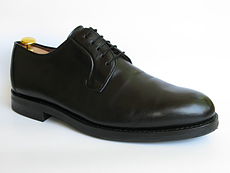 The name Blücher goes back to the Prussian Field Marshal Gebhard Leberecht Fürst Blücher von Wahlstatt (1742–1819), who had his soldiers equipped with this shoe model (at that time still as boots ) for the triumphant advance against Napoleon. The internationally used name still refers to its origins as a robust army boot.

The one-piece basic shaft cut with the lacing parts attached to the side (shrouds) is characteristic of this shoe model. Originally, the Blücher was always a welted shoe with a storm world ( storm frame ) to better protect the shoe against penetrating moisture. The shaft parts that hold the lacing were previously bribed or butt-sewn for the same reason (weather resistance); today these pieces of leather are often simply sewn on.

It is easy for laypeople to confuse the Blücher with the Derby , because both have so-called open lacing . However, the Blucher shaft cut does not show any additional quarters to accommodate the lacing and consequently does not have the derby bow typical of the classic derby , but consists, apart from the two sewn-on lacing parts, only of a single shaft piece.

Since the original name of the Blücher model is written with an umlaut, and this is only known in a few languages, the Blücher is also known internationally as the Blucher . In the United States of America, however, a blucher is often undifferentiated as a shoe model with open lacing, i.e. both a derby and a blucher .

In keeping with its origins, the Blücher is a rather rustic shoe model for leisure. Accordingly, the Blücher are often offered with Scotchgrain as the upper leather and with weatherproof (profile) rubber soles. The Blücher is not so much combined with business clothing, but rather worn with jeans or corduroy pants.