Bowood House is a country estate in the county of Wiltshire in the United Kingdom , between Calne and Chippenham , surrounded by a spacious park in the style of the reign of King George II. 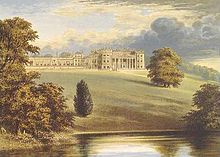 The owners were known not only as influential politicians, but also as generous patrons of art and science: Joseph Priestley worked as a private tutor on the country estate for many years and isolated the element oxygen for the first time in Bowood House in 1774. The researcher Jan Ingenhousz died in Bowood Park in 1799.

The park and gardens were designed by Capability Brown in the 1760s . They are one of the signature examples of the English style of the parks of the late Rococo period . The park is more than 8 km².

The main house was demolished in 1955 for economic reasons after it had been empty for a long time. The existing buildings are still of an imposing size. Bowood House is open for tours.