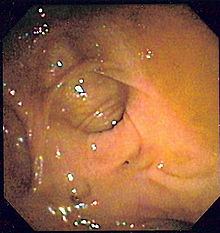 Laparoscopic view of a diverticulum of the sigmoid colon

Diverticulum in the contrast enema

The diverticulosis is a change in the colon in the form of small protuberances of the intestinal wall. These protrusions are referred to as false diverticula . They are called incorrectly because, in contrast to the real diverticula, only the mucous membrane and not the entire intestinal wall is everted.

Diverticulosis is widespread. Most of those affected are completely symptom-free. It is often found as a secondary finding during an intestinal examination ( colonoscopy ) in older people. As long as diverticulosis does not cause symptoms, no treatment is necessary. Switching to a diet rich in fiber is recommended. However, if complications such as inflammation called diverticulitis or bleeding occur, treatment is necessary. Surgical removal of the affected part of the intestine is recommended, especially if such inflammations of the diverticula occur repeatedly.

The exact cause of diverticulosis is still unclear. The consistency of the stool (especially hard stool) may play a role as a result of a low-fiber diet, forcing the colon to use more pressure to move through the stool. This increased pressure could cause the bulges in the wall of the colon. Most diverticula are located in the last part of the colon, called the sigma .

The diagnosis is made either endoscopically or often as an incidental finding as part of computed tomography of the abdomen.

It is not certain whether diverticular disease can be prevented. A change in diet is generally recommended. The proportion of fiber-rich / fiber-rich, non-flatulent foods should be increased. This makes the stool softer and easier to pass through the intestines. However, there is one study that shows fiber increases the risk. If inflammations or constrictions occur repeatedly, the doctor may May recommend surgery to remove the part of the colon affected by the disease.

According to a prospective observational study in the British Medical Journal ( BMJ 2011; 343: d4131), a vegetarian diet proved to be - statistically significant - protective, even independent of a high-fiber diet. It was based on an analysis of the Oxford cohort of the EPIC study with a population of 47,000 participants. In this age cohort there were 812 inpatient hospital admissions for diverticulitis within 11.6 years of follow-up, including six deaths. The epidemiologist Francesca Crowe from Oxford University not only demonstrated - as already known and expected from the earlier "Health professionals follow-up" study - an inverse relationship with the fiber content of the food eaten. They also found that vegetarians suffered 31 percent less often from severe diverticulitis than meat eaters (RR 0.69; 0.55-0.86).

Patients with diverticulosis usually have no symptoms and then do not need any treatment. A high-fiber diet with plenty of fluids is recommended. The use of bran makes sense in terms of nutritional therapy , e.g. B. Wheat Bran. Comparative studies have shown that bran particles larger than 1 mm in diameter have the best effect. Treatment is only necessary if diverticulitis occurs .