The diverticulitis is a disease of the large intestine , in which protuberances in the mucosa ( diverticulum forms) inflammation. The frequent occurrence of such protuberances is called diverticulosis and represents the preliminary stage of diverticulitis. The sigmoid colon is most frequently affected, i.e. in 95 percent of cases ( sigmoid diverticulitis - also known as "left side appendicitis"). Diverticulitis can occur in one percent of the transverse colon and two percent each in the caecum and in the ascending colon . As a rule, the sigmoid diverticula are so-called pseudodiverticula, i. H. the intestinal mucous membrane turns inside out through gaps in the muscular wall.

The formation of diverticula in the large intestine is common in western industrialized countries. Their frequency increases with age. It is rare in under 40-year-olds, around 30 percent in 60-year-olds and around 65 percent in 85-year-olds. About 12 to 25 percent of all people whose intestines have developed diverticula develop diverticulitis.

Risk factors are a low-fiber diet (according to one study, however, the opposite applies) and a lack of physical activity or obesity . Increased consumption of red (especially unprocessed) meat also increases the risk; this does not apply if poultry or fish are consumed instead. A vegetarian diet significantly lowers the risk of developing diverticulitis. Smoking and non-steroidal anti-inflammatory drugs are also considered risk factors.

Since diverticula are filled with feces, the thickening of the diverticulum can lead to the development of so-called fecal stones . This can lead to pressure necrosis of the mucous membrane in the diverticulum, which in turn results in inflammation of the diverticulum mucosa. The inflammation spreads to the surrounding area, so that, depending on the direction of spread, there may be accumulations of pus ( abscesses ) in the fatty tissue or it may spread to surrounding organs. This can lead to fistula formation in the large intestine with other intestinal regions, the urinary bladder or the vagina. At the rapid pace of the inflammatory process, as can be the case in very old people or in patients treated with anti-inflammatory drugs, an acutely life-threatening free peritonitis ( peritonitis ) results . In the case of long-term courses, the inflammation-related thickening of the intestinal wall leads to the narrowing of the clearing, which can result in an incomplete ( subileus or chronic ileus) or complete disruption of the intestinal passage , which is known as intestinal obstruction (or ileus ). 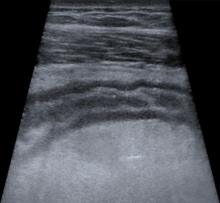 The symptoms are sudden pain over the affected section of the intestine, most often in the left lower abdomen (hence also left side appendicitis ), often radiating to the back and with peritonitis limited to this area . In addition, common symptoms are fever , nausea, vomiting, a change in bowel behavior from diarrhea to constipation with pus and mucus in the stool and difficulty urinating, called dysuria . The laboratory values ​​show an increase in CRP and leukocytes . In some cases, when examining the abdomen of the person affected, a cylindrical tumor (tumor in the sense of a space-occupying lump) can be felt. The further diagnosis takes place u. a. with the ultrasound and a CT scan of the abdomen. A colonoscopy should also be carried out at intervals in order to  rule out other - especially malignant - diseases.

There is no generally binding staging of diverticulitis. A classification proposed by Hansen and Stock is suitable for everyday clinical practice. It represents a pretherapeutic basis for the stage-appropriate therapy of diverticulitis. The findings of the clinical examination, the colonic contrast enema or the colonoscopy and computed tomography of the abdomen are taken into account. 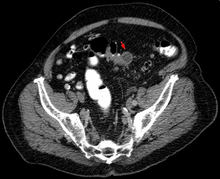 Treatment is usually carried out in hospital; outpatient antibiotic treatment can only be considered for mild diverticulitis. Possible antibiotics are metronidazole , ciprofloxacin and cefuroxime . Initial zero diet with parenteral nutrition or liquid nutrition can possibly improve the patient's condition by immobilizing the bowel. Applying ice to the affected region of the abdomen (so-called ice bladder) can alleviate the pain of the inflammation and possibly prevent the inflammation from spreading further. Since there is a risk of recurrence with complications (e.g. perforation and then fecal peritonitis ), a resection of the affected section of the intestine in an inflammation-free interval is recommended , especially in the case of recurrent diverticulitis . This general surgical indication from the 2nd attack is now considered obsolete. Nowadays, the indication for surgery is based on the course of the complications, so that several uncomplicated recurrences are not necessarily worth surgery. Nowadays, this elective operation can usually be performed laparoscopically . If complications such as perforation or heavy bleeding occur, an immediate operation is usually necessary. An emergency operation after a serious complication is usually carried out in the form of a so-called Hartmann operation, i.e. H. an enterostoma is temporarily created to avoid suturing two inflamed sections of the intestine - a one-step operation without an enterostoma is, however, also possible here. In the case of a covered perforation, i. H. a perforation that is sealed by neighboring organs, conservative therapy is usually sufficient. Nowadays, an abscess in the inflamed section of the intestine can also be drained percutaneously . The mortality rate for phlegmonous diverticulitis is less than one percent, for abscessing diverticulitis at around 1 to 3 percent and for free perforation at 12 to 24 percent.