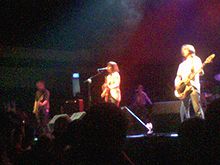 Charlotte Hatherley at Rock in the Park 2007

Hatherley's first band was Nightnurse . At a concert of this band she was discovered by Ash front man Tim Wheeler in 1997 in the Blue Moon Club and consequently joined Ash. In 2004 Hatherley brought out a solo album entitled Gray Will Fade , especially the single Bastardo delighted the critics. She was also featured this year as a guest on the album Armed Love by the Swedish rock band The (International) Noise Conspiracy .

On January 21, 2006 it was announced on the official website of Ash that Charlotte Hatherley is leaving the band after nine years.

On the album Never Say Never by Kim Wilde , which was released in August 2006, she can be heard with this in the duet Kids In America . A second album ( The Deep Blue ) was released on March 5, 2007 on Hatherley's newly founded label Little Sister .