The double church in Straden in Styria is a two-story Roman Catholic church that is integrated into the defensive wall of the Tabor complex.

The construction of the double church in Straden is related to the foundation of the Sebastian Brotherhood in 1517. The church was completed in 1535 and, according to an inscription, restored in 1631 at the expense of pastor Simon Wohlgemuth. In 1928 the turret on the west side of the church had to be repaired due to storm damage. 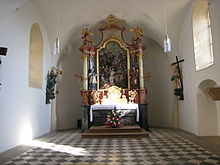 It is not known who created the altar. The altarpiece with the plague saint, who is surrounded by the fourteen helpers in need, comes from Franz Ignaz Flurer and was created between 1730 and 1735. The organ is Ludwig Greß's first work from 1780. The church is now used as a funeral hall.

To the Sorrowful Mother Mary (basement)

Straden, Lower Church of Our Lady of Sorrows, Altar

The altar erected in 1775 and the Pietà were made by the sculptor Johann Lehner from Radkersburg . A holy grave under the gallery through which one enters this church houses a sculpture of the body of Jesus, also made by Johann Lehner in 1779. The paintings on the vaulted ceiling were created in 1913/1914 by the Kerle brothers from Tyrol . Until about 1677, this church was low as Karner used (charnel house).