The indirect or automatic brake is currently the most widespread type of railway air brakes .

The brake is called indirect because the compressed air in a brake line ( main air line ) running through the railway vehicle or the entire train does not directly actuate the brake cylinder , but rather controls a control valve or a brake valve combination, which then lets the compressed air flow into the brake cylinder from a separate auxiliary air reservoir . With the development of the automatic brake, a rapid breakdown speed was achieved in trains, which means that even the last wagons of the train respond quickly. In the event of train disconnections or excessive leaks, the train is always braked. With emergency brake valves , the air line can be quickly evacuated and the train or the railway vehicle stopped in every vehicle connected to the main air line. 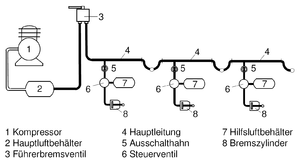 In the release position there is a constant pressure of approx. 5.0 bar in the main air line. The auxiliary air tanks of the individual vehicles or the train are filled. The driver's brake valve on the traction vehicle uses a pressure regulator to maintain a constant pressure in the main air line and to compensate for leaks in the couplings to a certain extent. The brake cylinders are in their home position.

By reducing the main air line pressure, the control valves reverse and the air from the auxiliary air tanks actuates the brake cylinder and thus the mechanical brake. The braking force can be increased gradually depending on the pressure reduction in the driver's brake valve. The brake is released by increasing the pressure in the continuous main air line to the normal control pressure. This basic principle is called an automatic single-chamber compressed air brake.

The development of rail vehicle technology and the speeds driven required increasingly precise braking technology. If the compressed air brake was a safe system that was suitable for rough railway operations, it was now time to refine the control technology. The leading companies in Europe were Knorr-Bremse and Westinghouse . These companies further developed the single-release compressed air brake , and multi-release designs such as the Kunze-Knorr-Bremse (KK), the Hildebrand-Knorr-Bremse (HiK), the Westinghouse-Bremse, the Knorr-Einheits-Bremse (KE) emerged. and so on. While the basics of braking technology, namely the actuation of the brakes by lowering the main air line pressure, remained the same, the types differ in terms of different control and transmission organs, speed and load-dependent braking effects and options for grading or maintaining the braking force.