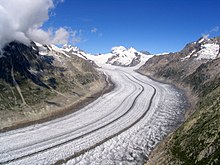 As medial is referred to in the geology moraine , the two at the confluence Glacier ( confluence ) are formed or are formed. The respective lateral moraines unite to form a central moraine. If the original glaciers are of the same size, the central moraine can be seen as a scree band roughly in the middle of the glacier ice.

Middle moraines are carried by the glacier and are therefore dependent on it. Middle moraines have no depth. They are thus to be distinguished from “deposits between two glaciers”, which are formed from overlapping lateral moraines or marginal glacial sediments from neighboring glaciers, each with its own dynamic. The debris from the central moraine on the glacier is called the upper moraine during transport and after it has been deposited .