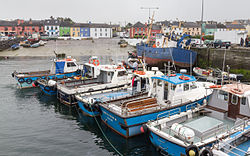 Portmagee ( Irish : An Caladh ) is a place in County Kerry in the Republic of Ireland . It is located on the west coast of Ireland on the Iveragh Peninsula south of Valentia Island .

The English-language name Portmagee comes from Captain Theobald Magee, a notorious smuggler from the 18th century. After serving as an officer in the army of King James II , he now worked as a trader who traveled by ship between France , Portugal and Ireland. The trade in smuggled goods such as brandy , textiles , tea and tobacco was very profitable because the landings were difficult for the police to detect and prevent due to the rugged coastline in the south-west of Ireland.

The Irish name means "landing place" or "quay". It used to be possible to cross over from here to Valentia Island. Today the place is directly connected to the island by a bridge. The place is also a departure point for many tourist boats that sail to Skellig Michael island .

The ruins of the Illaunloughan Island Monastery are located on a small island off the port .