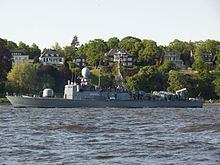 The ship was put into service on April 28, 1983 by the German Navy . The ermine had a crew of around 36 soldiers, five of them officers. The last home port was Warnemünde , where it was part of the 7th Schnellbootgeschwader. Missions were made by changing crews of the 7th Schnellbootgeschwader. As part of UNIFIL , the boat was deployed from October 2008 to December 2009 and from June 2012 to 2013. On November 16, 2016, the ermine was decommissioned.

On February 15, 2013, a boatman in command was allegedly dragged out of his bunk by several chief mates, fixed on a table and painted on his leg with the words “This is where the Mongos live”. Because the boatswain is of Thai origin, xenophobic reasons were initially suspected. The prosecution made it clear, however, that the boatswain had always addressed the chief mates as Mongos himself. The chief mates were also sent to their bunks with the words "The Mongos are sleeping". So the entire incident, a possible act of revenge, was triggered by the boatswain himself. The attack is said to have occurred during the UNIFIL mission in the port of Beirut .