The city museum after the reopening

The Stadtmuseum is a museum in Gera that deals with the history of the city. It is located at Heinrichstraße 2 , in the building of the former breeding and orphanage - right in the center of the city near the market.

Prehistory of the building

The breeding and orphanage was built between 1724 and 1739 on the site of the Marienhospital, which was first mentioned in 1445 and burned down in 1639. In the basement there were prison cells, the other floors served as lounges for the orphans and the mentally ill housed in the house.

In 1824 the orphanage was closed and the orphans were placed in middle-class families. However, the house served as a prison and workhouse until 1886, after which individual apartments were rented out.

Foundation of the city museum 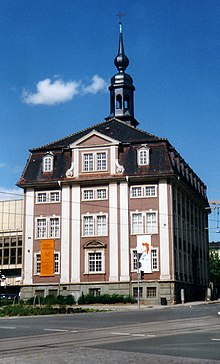 City museum before the renovation (1999)

On the initiative of Johann Christian Seydel , a wealthy citizen of the city (Seydelsche dyeing), the Gera citizenship decided to found the city museum in 1878. The collections were gradually built up and placed in the Natural History and Cultural History departments . The building on Heinrichstrasse was opened on April 12, 1914, and the collection could now be presented in a clear and contemporary form. For this purpose, the house underwent an extensive interior redesign, in which the small and narrow rooms of the house were replaced by spacious exhibition rooms.

During the heaviest bombing raid on Gera on April 6, 1945, the building burned down completely. In view of the housing shortage in the city and the lengthy construction phase, a quick reopening was not to be expected. From 1947 the city made the building Nicolaiberg 3 provisionally a museum, also because of its importance for school education. After appropriate renovations, a small exhibition on the city's history was opened in 1950 and, in the period from 1951 to 1956, the Museum of Natural History was gradually opened in Schreiber's house . The Botanical Garden Gera with an area of ​​0.7 hectares was included in the museum at a later date .

The city museum was able to reopen in 1956, so the art and cultural history collection returned to its ancestral building. The city museum provides a complete overview of the city's history from prehistory and early history (East Thuringia), the emergence and development of Gera as the residential city of the Reussians. The Gera textile manufactories form economic-historical focal points, their further development into modern industrial and commercial enterprises.

At the same time as the construction of the neighboring Elster-Forum shopping center , extensive renovation of the museum began, which was finally reopened on May 20, 2005. Among other things, the entrance was relocated from the south side to the front of the museum, where it had been until the beginning of the 20th century. The exhibition concept has also been modernized and for the first time also includes the history after 1945. The number of visitors was 16,376 in 2006, 10,781 in 2007 and 13,229 in 2008.

The Geraer Höhler (underground storage rooms) in the old town of Gera are also looked after by the city museum .