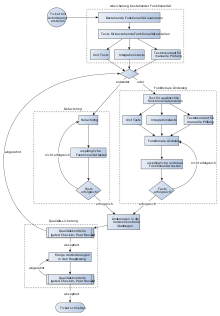 According to the classic procedure, for example according to the waterfall or the V-model , tests are developed parallel to and independently of the system to be tested or even according to it. This often leads to the desired and required test coverage not being achieved. Possible reasons for this include:

Another disadvantage of classic white box tests is that the developer knows the system to be tested and its peculiarities himself and as a result tests unintentionally "around errors" due to operational blindness.

The test-driven development method tries to counteract the reasons for insufficient test coverage and some of the disadvantages of white box tests.

In the test-driven development between testing on a small scale (is unit testing ) / unit testing and testing in the Great ( integration testing , system testing , acceptance testing ) to distinguish, with Beck's method is designed for unit testing.

The tests first method can be viewed as a preliminary stage of test-driven development.

Unit tests and units tested with them are always developed in parallel. The actual programming takes place in small, repeated micro-iterations. Such an iteration, which should only last a few minutes, has three main parts, which are called in the English Red-Green Refactor

These three steps are repeated until the known errors have been fixed, the code provides the desired functionality and the developer cannot think of any further useful tests that might still fail. The technical program unit (unit) treated in this way is then regarded as ready for the time being. The tests created together with her are retained so that, even after future changes, tests can be carried out to determine whether the aspects of behavior that have already been achieved are still met.

So that the changes - also called transformations - lead to the goal in step 2, each change must lead to a more general solution; it must not only treat the current test case at the expense of others. Tests that go into more and more detail drive the code towards an increasingly general solution. Observing the transformation priorities regularly leads to more efficient algorithms.

Consistently following this procedure is an evolutionary design method in that each of the individual changes evolves the system.

The main objection to the procedure described is the supposedly high effort.

The idea described makes use of the fact that the intellectual effort that is invested in the constructive description, i.e. the program, during programming, and that makes up the main part of the programming time (in relation to the typing effort, for example), is a list of individual points and cases to be fulfilled includes. With just a little more effort, the case to be covered can be described exactly at this point in time before programming; the previous writing of a few test lines can even lead to better mental structuring and higher code quality. Second, test-driven development leads to a certain discipline, which functions are implemented in which order, because you first have to consider a test case, and thus potentially to a higher consideration of the customer benefit, see also YAGNI .

Unit tests or automated tests in general are often described as the safety net of a program in the event of necessary changes; without a high test coverage , a software system is fundamentally more prone to errors and problems in further development and maintenance.

Even with the first creation, the effort with TDD with a little practice to fulfill a certain functionality can be less than the effort of a supposedly quick solution without automated tests. According to the consensus, this applies all the more, the more durable the system is and therefore repeatedly subject to changes. The effort to write automated tests afterwards is much higher because the individual requirements and program lines have to be analyzed again, and a test coverage comparable to that of TDD is hardly realistic for reasons of effort and cost.

System tests are always developed or at least specified before the system itself. In the case of test-driven development, the task of system development is no longer to meet requirements formulated in writing, as is traditionally the case, but to pass specified system tests.

Similarities of test-driven development with system tests and unit tests

With both types of tests, the aim is as complete a test automation as possible . For test-driven development , all tests must be able to be carried out easily (“at the push of a button”) and as quickly as possible. For unit tests this means a duration of a few seconds, for system tests of a maximum of a few minutes, or only in exceptional cases longer.

The great advantages of the test-driven method over the classic are:

Test-driven development is an essential part of Extreme Programming (XP) and other agile methods . It can also be found outside of these, often in connection with pair programming . As an exercise method are often Katas used.

The test-driven development is urgent

so that the iterations can be run through quickly and easily.

In Java development, Ant , Maven or Gradle and JUnit are mostly used for this . Similar tools exist for most other programming languages, such as: B. PHP PHPUnit or Ceedling , Unity and CMock for C .

For complex systems, several sub-components have to be developed independently of each other and third-party components are also used, such as a database system for the purpose of persistent data storage. The correct cooperation and function of the components in the system must then also be tested. In order to be able to test the individual components separately, which, however, depend essentially on other components for their correct function, mock objects are used as their substitutes. The mock objects replace and simulate the required other components in the test in a way that the tester programs them into.

A tool for acceptance tests and system tests is, for example, Framework for Integrated Test . A popular FIT variant is Fitnesse , a wiki server with an integrated test creation and test execution environment.

The method of test-driven development can also be used incorrectly and then fail. Programmers who have no experience with it sometimes find it difficult or even impossible. You're wondering how to test something that isn't there yet. The effect can be that you neglect the principles of this method, which can lead to difficulties in the development process or even its collapse, especially with agile methods such as extreme programming. Without sufficient unit tests, sufficient test coverage for refactoring and the desired quality will not be achieved. This can be counteracted with pair programming and training.

A key argument from opponents of test-driven development is that unit tests in particular unnecessarily increase the effort required to make changes to existing functionality, because a change to the production code causes a disproportionate number of unit tests to fail. The reason for this, however, is usually that the tested unit was not sufficiently separated, i.e. the tests are not atomic.

In order to avoid this problem, it is necessary that the programmers are trained in how to break down the requirements into atomic functional units and practice this.

No substitute for any other test type

Even this type of programming, which relies heavily on tests, like all test types, cannot reveal every error: