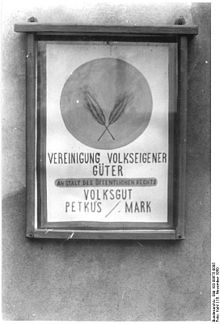 The shield of the Petkus estate

The Association of People's Own Goods (VVG) was an organization in the GDR . In 1949, the VVG brought together the 669 nationally owned estates that were created with the land reform and industrial reform in the Soviet Zone of 1945/46 , which were managed by permanently employed farmers. The VVG was directed from the central office of the Association of People's Own Goods (ZVVG) in East Berlin , which was transferred to the Ministry of Agriculture in 1950. The individual goods were subject to the instructions of the 16 regional associations (GVVG).