The Civil Defense Museum is located in an underground, three storey deep Civil round bunker in the city district Wipkingen in Zurich in Switzerland . The historical building has been run by the City of Zurich since 2005.

The profile of the only civil defense museum in Switzerland is unique in Europe. It shows a historical snapshot of the Civil Defense (former names: passive air defense , Blue Air Protection ) and the medical service of the city of Zurich at the time of World War II and its further development to the modern Civil Protection . 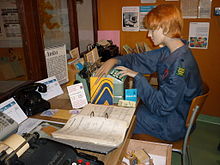 The Federal Assembly created on September 29, 1934, an urgent federal decree , the legal basis for the construction of the air protection, obliged the communities to create shelters. In addition to many other shelters, the city of Zurich built the Landenberg medical aid station .

The Landenberg medical aid center had the task of running a protected medical aid center for the civilian population (100 patients) as well as a troop accommodation for the "blue air raid". For this purpose, a three-storey round bunker with treatment, care and crew rooms was built, whose emergency power generators, oil tank and water and food supplies should allow several weeks of independent operation. Effective filters against chemical warfare agents could be connected upstream of the ventilation system.

The Office for Civil Protection of the City of Zurich, created in 1955, took care of the modernization, maintenance and care of the civil protection facilities. With the Federal Law on Civil Defense of 1963, the construction of shelters in residential buildings became mandatory throughout Switzerland from 1963. Together with the public civil defense systems, it had to be ensured that a shelter was available for every inhabitant. 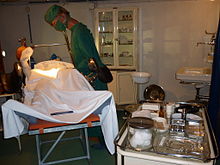 The Landenberg round bunker, which no longer complies with the latest standards, was taken out of service in 1984 and now served entirely as a warehouse for the Office for Civil Protection. Employees in the materials department took the initiative to guard the historical equipment and materials.

From 1993 onwards, interested insiders were shown the carefully compiled material and the facility. The recognition of the guests and the popularity of the tours led to Schutz und Rettung Zürich developing an exhibition concept to make the round bunker and all exhibits accessible to the public.

In August 2005 the over 60-year-old round bunker Landenberg opened its doors as the only civil defense museum in Switzerland to date. The bunker hidden under a green area in Zurich-Wipkingen is also a rarity in terms of architecture. On an exhibition area of ​​1500 square meters, the route from the bunker to the museum is shown using the original installations and objects. The exhibition also focuses on the development of Swiss civil protection in the period before, during and after the Second World War using tools for rescue operations, technical assistance and the protection of cultural assets .

The Civil Defense Museum is looked after by Schutz & Rettung Zürich. A visit is only possible in guided tours. Group tours are possible upon registration. Public tours take place several times a year.