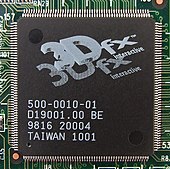 The Voodoo 2 is a 1998 imagined 3D - graphics chipset of the Californian company 3dfx Interactive .

Compared with its predecessor, the Voodoo Graphics which can Voodoo 2 - chipset primarily a double bar (Chip: 90  MHz 90 MHz: storage) show, thereby a doubled performance of about 180 million Texel reached s /. The chipset was also able to address a large amount of texture and image memory (texture memory: 4 or 8 MB, image memory: 4 MB).

The functionality of the Voodoo 2 has also been expanded compared to the previous version : For the first time, trilinear filtering and single pass multitexturing were available on a 3dfx chipset. There was criticism of the lack of support for 32-bit color display, which at that time was already to be found in comparable competing products.

The special feature of the Voodoo 2 , however, was the possibility of connecting two identically equipped Voodoo 2 cards to one card using a small ribbon cable ( SLI mode). This consortium, based on the Scan Line Interleave method, doubled the image memory (but not the texture memory), so that it was possible to play with a resolution of 1024 × 768 pixels and an activated Z-buffer and the performance in the other resolutions almost doubled.

In an SLI network, one card calculated the even and one card the odd image lines, so that both cards were used to a similar extent.

In order to use a card based on the Voodoo 2 chipset meaningfully, at least a Pentium with a clock rate of 200 MHz is required, below which the performance difference to a card based on the Voodoo 1 is marginal. For an SLI network, it should be a Pentium II with 400 MHz or higher. However, an SLI combination scales with the computing power of the processor, since Transform and Lighting must be completely calculated by it. Even with CPUs around 1 GHz, you can still determine performance increases, although these did not come onto the market until about two years later.