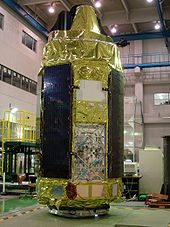 ASTRO-E is the name of two Japanese space telescopes for X-ray astronomy . The second satellite ASTRO-E2 was named Suzaku after a bird in Asian mythology.

ASTRO-E was developed as the fifth Japanese X-ray satellite by the Japanese Institute for Space Research ISAS , part of JAXA since 2003 , together with NASA . ASTRO-E covers the energy range 0.2–600 keV with three instruments  . Compared to other X -ray satellites , it is particularly characterized by its sensitive and high-resolution X -ray spectrometer (XRS), which measures the energy of the incoming X-ray photons very precisely via their heat release in a cooled detector.

The original ASTRO-E mission failed on February 10, 2000 at 01:30 UTC due to a malfunction of the MV-4 missile that prevented the satellite from reaching the planned orbit.

In 2001, the construction of the replacement satellite ASTRO-E2 began, which was launched on July 10, 2005 at 3:30 UTC with an MV-6 rocket from the Uchinoura Space Center . The on-board systems and instruments were initially successfully put into operation, but on August 8, 2005 it was found that all of the liquid helium that was to be used to cool the X-ray spectrometer's detector to minus 273.09 ° C had evaporated. As a result, the observations planned with this instrument can no longer be carried out. The other two instruments on the satellite - XIS ( X-ray Imaging Spectrometer ) and HXD ( Hard X-ray Detector ) - can still be operated.