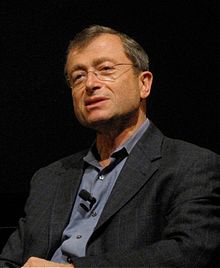 Andries "Andy" van Dam (born December 8, 1938 in Groningen ) is an American computer scientist who is a pioneer in computer graphics .

Van Dam studied at Swarthmore College with a bachelor's degree in 1960 and at the University of Pennsylvania , where he received his master's degree in 1963 and received his PhD in 1966 with Harry Joshua Gray (A Study of Digital Processing of Pictorial Data). From 1965 he was at Brown University , where he was one of the founders of the computer science faculty, which he headed from 1979 to 1985. From 2002 to 2006 he was Vice President for Research at the university.

From 1996 to 1998 he headed the inter-university research consortium NSF Science and Technology Center for Graphics and Visualization .

In 1967 he and Ted Nelson developed one of the first hypertext systems, Hypertext Editing System (HES), which ran on the IBM / 360 system. In 1969 he was one of the founders of ACM SIGGRAPH ( ACM's Special Interest Group in Computer Graphics). He is co-author of a standard work on computer graphics.

He is a Fellow of the Association for Computing Machinery and the IEEE (both since 1994). In 1996 he became a member of the National Academy of Engineering , in 2004 the American Association for the Advancement of Science and 2000 Fellow of the American Academy of Arts and Sciences . He has multiple honorary doctorates (Swarthmore College, TU Darmstadt, ETH Zurich, University of Waterloo). In 1991 he received the Steven A. Coons Award from ACM SIGGRAPH.